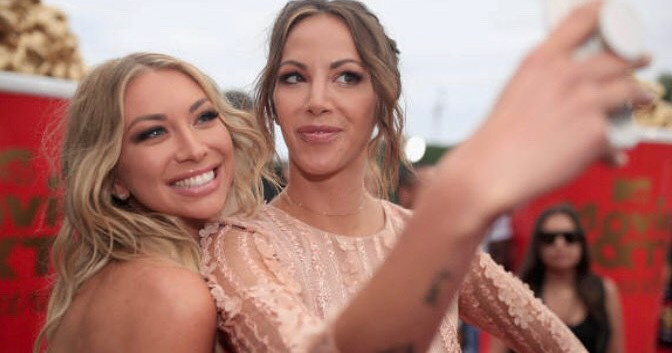 Girl code broken! On the explosive part one of the Vanderpump Rules Season 8 reunion, Max Boyens shared some news that had jaws hitting the floor. He had secretly hooked up with Kristen Doute last fall, after filming for Season 8 ended.

Based on the reactions, no one on the VPR cast knew about the hook-up. And the shockwaves rippled into an explosive virtual confrontation between Kristen and her co-stars.

Stassi Schroeder was especially furious over the revelation. In fact, Stassi was angrier than Dayna Kathan, whom Stassi believes Kristen betrayed with the hook-up. Why did Stassi react so strongly? Let’s take a stroll down memory lane to Season 2.

Kristen Once Slept With Stassi’s Ex, Jax Taylor on Season 2 of VPR

It may seem that everyone on Vanderpump Rules has slept together. And they have, even Jax and Kristen. As longtime VPR fans know, Stassi and Jax were dating prior to the show and throughout the show’s first season.

Stassi ended their relationship at the end of Season 1 but Jax spent most of Season 2 trying to win her back. He was almost there until Katie Maloney spilled some piping HOT tea: Jax had slept with Stassi’s BFF, Kristen Doute.

At the time, Kristen was in a relationship with Jax’s close friend Tom Sandoval. Kristen details what prompted the affair in her new book, He’s Making You Crazy.

It seems Stassi’s main issue is her belief that Kristen betrayed Dayna by sleeping with Max. As fans know, the two VPR newbies briefly dated during Season 8. Dayna still has a thing for Max, which Stassi thinks Kristen knew or should have known.

However, Kristen insists that she was single at the time of the hook-up and so was Max. But Stassi called her out for that, too. She said, “I thought that Kristen ‘has been in a relationship’ the whole time. When were you single, Kristen?”

Kristen didn’t respond to that question directly but doubled down on being single when the hook-up happened. Furthermore, Kristen says she didn’t know that Max and Dayna were talking again at that time.

Regardless, Stassi feels that Max should have been OFF LIMITS to Kristen.

Stassi to VPR Co-Star: ‘This is So F**king On Brand For You’

The Next Level Basic author WENT IN on Kristen for sleeping with Max. Stassi tells her that it’s “so f**king on brand” for Kristen to sleep with a friend’s ex. She slams Kristen as a shady liar with no remorse, Us Weekly reports. Stassi tells her former friend the heart of the issue:

“This is about you hooking up with another one of your friends’ ex-boyfriends.”

Stassi wasn’t the only VPR star unhappy about the hook-up. Dayna was upset, yes, but James Kennedy was almost as pissed off as Stassi. James and Kristen began dating after Tom Sandoval dumped her for sleeping with Jax.

Things did not end well between James and Kristen. James made it clear what he thought of Kristen, calling her “pathetic” for hooking up with Max.

While the VPR stars attacked Kristen, many fans took up for her on social media. They called out the double standard of no one holding Max accountable. For many, it reminded them of how Stassi and co. blamed Kristen while giving Jax a free pass.

Instagram user @_surrules has several short clips of the revelation and the fallout. Check out the one below and then visit their Instagram for more clips.

Max reveals that he hooked up with Kristen. Part 1. #pumprules #vanderpumprules