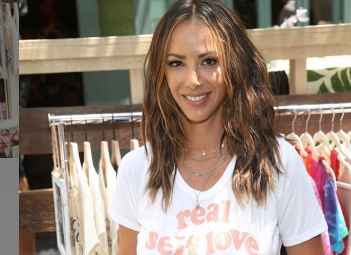 Kristen Doute is making the rounds in virtual press outlets due to releasing a new book. The Season 8 reunion of Vanderpump Rules revealed some of the things she revealed didn’t sit well with her castmates. It’s no secret she already was on icy territory with former besties Stassi and Katie Maloney.

In the book, Doute wrote about her relationships including hook-ups with her fellow VPR co-stars. The cast jumped at the chance to shame her for one hookup revealed by Max Boyens but left him alone.

Fans Were Supportive Of Kristen Doute

Max revealed he and Kristen Doute hooked up twice while single. Stassi Schroeder said she thought Danya Kathan, who Max hooked up with as well, was her friend. Max also dated another cast member Scheana Shay. The hookup with Kristen had been a secret until Max spilled the beans.

Kristen said when it happened she didn’t know Danya was into Max. Stassi responded with, “when were you single Kristen?” According to The Inquisitr she said, “I feel like this is just so on brand for you to act like you’re close to Dayna and then go for the dude that she’s talking about.” She then told her she was shady and insane. Shots fired! Considering the two had a falling out because Stassi didn’t think she should still be with an ex, this argument is frustrating for the former SURver.

James Kennedy, who also dated Kristen weighed in saying he wasn’t surprised. The reality star said, “Kristen is doing the same s*it she’s been doing for the last decade.” Kristen’s fans came to her defense wondering why she was taking all the heat for the hookup and Max wasn’t getting any.

The Shaming From The Cast Came Off One-Sided

Fans were quick to point out Kristen Doute was taking all the heat. One said, “as usual when a guy and girl hook up, the girl gets shamed for it and the guy walks away unscathed.” Another said Stassi just wants to, “sl*t-shame Kristen. Max does the same thing and they make excuses for him.”

Some of the other fans wanted to know why Dayna was so angry about the hookup. They reminded other fans that Dayna went for Max’s friend Brett after they broke up.

In her new book, “He’s Making You Crazy,” Kristen detailed several relationships including Tom Sandoval and James Kennedy. She also talked about her hookup with Jax Taylor. although she left names out of the book. The back and forth between the Witches of WeHo is likely not over. Fans will continue to watch the aftermath of the Vanderpump virtual reunion. They also will wait to see if any more secrets revealed in Doute’s books will raise any hackles.