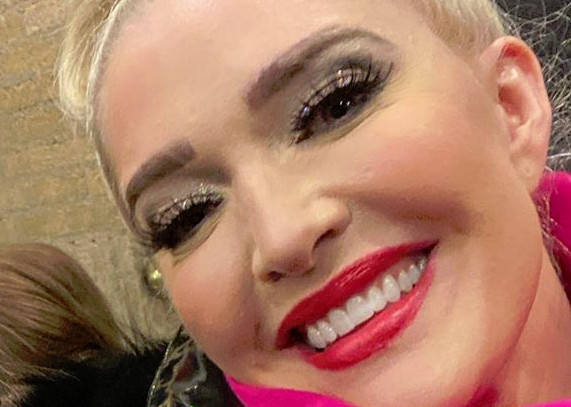 Don’t talk bad about her child! The Real Housewives of Beverly Hills star laid down the law after a follower tried to diss her police officer son. As fans know from her testy exchanges with former co-star Eileen Davidson, Erika’s son, Tommy Zizzo, is a Los Angeles police officer.

The Broadway star bristled earlier this week when a follower commented negatively about her son on her social media.

On Tuesday, June 2, many users across all social media platforms posted a photo of a black square. The purpose was to show support for the Black Lives Matter movement after another senseless death allegedly caused by a police officer.

Minneapolis resident, George Floyd, was restrained on the ground with a foot to the neck for over 8 minutes. Three other officers stood nearby without intervening. The incident was filmed by witnesses and went viral, sparking outrage and days of protests, which are still on-going.

Some of Erika’s followers apparently think the mother of a police officer can’t show support for the protests against police brutality. Or somehow think that Erika’s son must be racist simply because he has a badge.

He’s not and Erika let those critics know it in a truly Erika way.

Erika Claps Back at Commenters Calling Her Son Racist

Us Weekly reports that a fan took issue with Erika’s post meant to show solidarity. Reportedly, the fan wrote, “Your son is an officer!”

The RHOBH star quickly shot back that her son was “brought up NOT to be racist.” Furthermore, he protects and serves people of all colors.

Erika had some advice for the fan: “f**k you and stay off my page.”

For the most part, fans were supportive of Erika AND her son. One fan wrote that it must be “hard” to be the mom of a cop.

Last month Erika posted a rare photo of her son on her Instagram account. The photo shows Erika’s son standing on the streets of L.A. in his police uniform.

She wrote, “people say we look alike” in the caption. However, she turned the comments off to prevent rude comments.

People say we look alike. No, you can’t comment. 😂

While Erika doesn’t want anyone to talk about her son, she has a lot to say this season about Denise Richards’ children. In an earlier episode, Denise’s teenage children overheard the RHOBH ladies discussing threesomes.

Understandably, Denise was not happy about what her daughters overheard. The ladies continue to fight over their belief that Denise is a “hypocrite” considering her acting roles.

In the episode airing June 3, Denise walks out of a BBQ after the ladies won’t stop talking about her children. The discussion continues next week, with Lisa Rinna chasing after Denise.

The midseason trailer aired at the end of the episode. Check it out below and keep watching RHOBH Wednesdays on Bravo.

Tammy Slaton Doesn’t Want Children, Only Wants To Push Out Farts
See The Cutest Photos Of Alyssa Bates’ New Baby Girl
‘DWTS’ Pro Britt Stewart Appeared In This Popular Teen Movie Franchise
Where Can You Watch ‘When Calls The Heart’ Season 8?
Rachel Lindsay May Host ‘After The Final Rose’ This Season