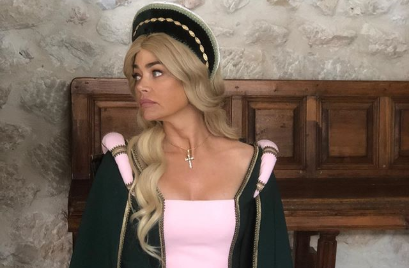 The girls of RHOBH have been bickering and a main argument aired between Denise Richards and Lisa Rinna. On a trip to Santa Barbara, Denise became defensive when the others mentioned her kids.

The conversation started innocent enough with Denise telling the girls how she decided to do Wild Things. Her character is famous for engaging in a kiss with Neve Campbell. Lisa asked her how she’d feel when her girls saw it.

Denise replied, “well, I hope to God they don’t see it.” Lisa then said they’d probably seen it already and Denise insisted that they hadn’t.

What Question Did Denise Richards Get Defensive About?

Denise Richards said, “I don’t want them to have that visual.” She said she would have done things differently if she’d been thinking of her kids’ opinions. She then talked about how she had the girls over and they were talking loudly about threesomes according to People. Denise said, “I would not want to hear my mother and her friends talking about threesomes.”

She said, “Honestly, it takes a lot to offend me. I wasn’t even going to say anything until Sami said something to me and I was like, oh s—, you know, it affected her.” The girls pressed her for more information, but she refused to talk about it anymore.

That wasn’t the end of it. The next day when they went to lunch, Lisa confronted Denise Richards. She told her she wasn’t comfortable with their conversation. Lisa said, “I feel like you shut us down a little bit, Denise, with all due respect, by saying we’re not going to talk about the kids.” Denise said there wasn’t anything else to say but Lisa sensed some anger.

“We had talked and talked and talked. There was nothing else I could say about the issue,” Denise replies. She reiterated Sami had said something and told her, “now I know that moving forward they won’t be in earshot of this group.”

The Women Called Denise A Hypocrite For Her Response

Lisa told Denise Richards, “I feel like you’re using the kids to make us somehow feel bad.” Denise said she’s not a judgmental person but then the others got involved. Erika Girardi said, “it felt a little judge-y for us.”

After some more arguing Lisa said, “with all due respect, you’re being contradictory because of the way you’re open about s*x as much as I am.”  Erika said, “you can’t talk about the size of your husband’s penis and getting a happy ending and then we’re the bad moms.”

Denise said she never said they were bad moms and Lisa called her a hypocrite. Denise denied it saying she doesn’t want her kids to hear or see things she talks about with her friends. That’s when Lisa took it to another level saying, “do you talk about the hookers around your kids? About the hookers that Charlie brings around? Because you’ve been quite free with us.”

This shocked Denise and she said she’d talked about it privately. In the end, Denise questioned Lisa’s motives. She said, “wow. This is my friend of 20 years. She knows I’ve protected these kids all these years. I don’t know if she’s trying to embarrass me or humiliate me.” Denise will undoubtedly have a rebuttal and fans are looking forward to seeing what she had to say.