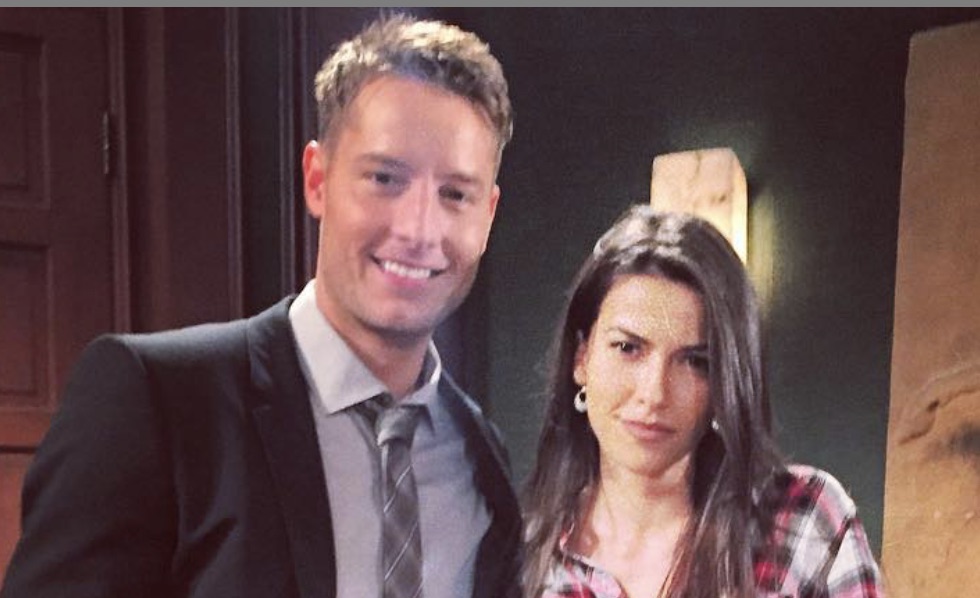 This Is Us star Justin Hartley has clearly moved on from his ex, Chrishell Stause, with his former Y&R co-star Sofia Pernas. The couple were seen kissing outside of an orthopedic clinic, of all places. Meanwhile, on Selling Sunset, Chrishell cries over Justin. She laments the end of their marriage. What is the latest news in this real-life soap opera?

On Friday, Justin Hartley was seen kissing his former Young and the Restless co-star, Sofia Pernas. According to TMZ, this was outside of the Southern California Orthopedic Institute in the Los Angeles area.

Sofia was in the driver’s seat, dropping him off. He was outside of the vehicle, wearing sunglasses, planting a rather passionate kiss on his new girlfriend. No social distancing here!

A few hours later, Pernas picked him up from the healthcare institute. This is the sort of intimate errand done by a close, personal friend. Have they been dating a while? He was wearing a face mask, as he was wheeled to the vehicle by a masked, healthcare attendant.

Hartley has not dated anyone since blindsiding Chrishell Stause with divorce papers. TV Shows Ace had reported that Justin Hartley served Chrishell Stause, his wife of two years, divorce papers. The biggest shocker was that he cited the date of separation as July 8, 2019. The couple had been seen on red carpets, parties and snuggled up together numerous times between that July date and a week before Justin filed for divorce.

TV Shows Ace shared that Chrishell Stause thought that Justin changed the date of separation to July because he was going to get some sort of big payout. She also posted a cryptic quote on her Instagram page about people changing. Otherwise, there was no information as to why the couple split up. Some friends surmised that the couple were in different places. Chrishell was ready for babies. On the other hand, Justin was ready to move his career to the next level.

Neither have dated since the split. There did not seem to be room for romance for the two career focused exes. That was until Friday, when Justin Hartley was seen kissing Sofia Pernas.

Did you guys watch @justinhartley host @theellenshow today?? 🙌🏽Ellen you were missed, so we decided to take a group shot with you anyway! 😆 #NailedIt #TheEllenShow #ThisIsUs #Days #NBC #NBCfamily

Who Is Sofia Pernas?

Young and the Restless stars will remember Sofia Pernas as Marisa Sierras, Adam Newman’s girlfriend. Of course, Justin portrayed the mercurial blackguard Newman in 2015. At this time, he had started dating Chrishell in 2014, and the couple married in 2017. But, in 2020, Sofia and Justin are now a real life couple. While we are at it, Chrishell Stause was on Y&R in 2016, playing Bethany Bryant.

Currently, Sofia Pernas is starring in the CBS adventure romance, Blood & Treasure. She portrays seductive and mysterious Lexi Vazeri. Season 2 will start out sometime in the fall, as there have been some delays due to the coronavirus.

Anyone who has recently streamed Selling Sunset Season 2 has seen the emotional preview of Season 3. According to TV Shows Ace, Chrishell Stause was crying over their divorce. Her fellow real estate agents supported her though this painful breakup. Looks like we will have to wait until Selling Sunset Season 4 to get her reaction to Justin dating Sofia!

Be sure to check back with TV Shows Ace for the latest Justin Hartley news.