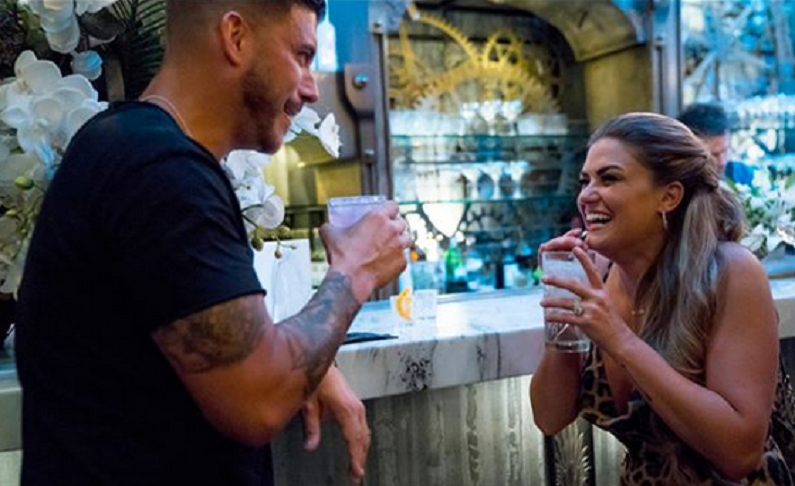 Jax Taylor and Brittany Cartwright celebrated their five-year anniversary on Sunday, May 24. The Vanderpump Rules couple took to social media to commemorate the occasion. Jax also had a special night planned for them. Amid the California shutdown, they had a date night in.

This comes after the explosive Season 8 Vanderpump Rules finale that aired last week. In the final moments, Jax Taylor is seen spiraling out of control as Lisa Vanderpump tries to console him. Prior to that, he fought with former best friend Tom Sandoval. Fights broke out among the crew. Even the Witches of Weho – Stassi Schroeder, Kristen Doute, and Katie Maloney-Schwartz – are no longer friends.

On Sunday, May 24, Jax Taylor took to Twitter to commemorate his five-year relationship with Brittany Cartwright. He also revealed that it is 30 days until their first-year wedding anniversary. Jax shared a sweet photo of him and Brittany kissing in front of their wedding cake.

But that’s not all. Jax also took to his Instagram Stories to celebrate their special day. He wrote, “You are my best friend and partner in crime. Love you more than you know.” Jax also shared the following photo of him and Brittany smiling on a flight.

“Happy 5 years baby girl,” the reality star wrote in the caption. He also included a sticker that read, “Love you.”

Brittany took to her Instagram Stories to share this throwback photo of the couple on the beach. “5 years ago today,” she wrote. “Love you @mrjaxtaylor.”

The couple also gave their followers a glimpse into their date night. They ate tacos and watched a romantic movie. Their date night is low-key and quiet, considering the state of California is still in a lockdown among the coronavirus pandemic. Jax and Brittany are feeling the love despite a volatile Vanderpump Rules Season 8 finale. Emotions are said to run high during the Season 8 virtual reunion.

Per The Daily Dish, the emotions will intensify during the Vanderpump Rules Season 8 virtual reunion. Brittany Cartwright and Jax Taylor weren’t originally on board with the idea of a virtual reunion. But, they caved in and showed up anyway. BravoTV.com shared a teaser for the three-part reunion, which airs on Tuesday, June 2 at 9 p.m. ET.

“Who’s gonna be the first one to cry?” Scheana Shay says with her trademark smile.

The virtual reunion will be just as explosive as the in-person one. There will be plenty of confessions, shouting matches, and tears shed. One confession has the entire cast in shock. Before the Season 8 reunion, viewers will be treated to Season 8 Secrets Revealed episode, which premieres on Tuesday, May 26 at 9 p.m. ET.