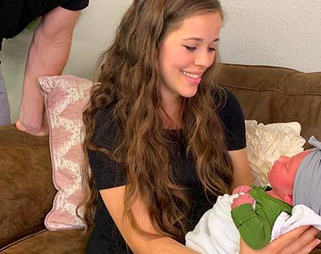 Recently, Jessa Seewald shared a video of her 11-month-old daughter Ivy learning how to walk. Of course, Duggar fans are loving the video and think Ivy is so cute. Lots of comments on the post are about how sweet Ivy is. Plus, fans love the interaction between Ivy and Jessa. Jessa is so happy for her little one as she walks across the room.

But, the post is also a reminder to fans that Ivy is nearly one year old. Many of the comments on the post mention the possibility of Jessa even being pregnant right now. Some think that she’s trying to hide a bump in the video.

How often do Jessa and Ben have children?

One reason that Duggar fans think Jessa might have another baby soon is that she has given birth in odd-numbered years in the past. Spurgeon was born in 2015, Henry was born in 2017, and Ivy was born in 2019. If Ben and Jessa want to stick to that same age gap, they will likely have a baby sometime in 2021.

If this is the case, they likely won’t be announcing a pregnancy too soon. And if Jessa plans to give birth in 2021, she could get pregnant any time now. But many people wait to announce their pregnancies until they’re further along. So, it could be at least a few months until Jessa announces a pregnancy. And she might not even get pregnant in 2020. She has until March 2021 to get pregnant if she wants to keep with the odd-numbered year pattern.

Right now, only one family member is pregnant. Or, at least only one has shared that news publicly. In March, Joy-Anna and Austin Forsyth revealed they’re expecting a rainbow baby. A rainbow baby is a baby who is born after a loss. Joy-Anna lost a baby at 20 weeks gestation in 2019. Now, she and Austin are happily expecting a baby girl. The couple already shares a two-year-old son Gideon.

Fans do have suspicions about other Duggars possibly being pregnant. But for now, Joy-Anna is the only one who has officially made that announcement. For example, Jinger and Jeremy Vuolo’s daughter Felicity will turn two in July. But the couple has yet to expand their family. They do seem to be stepping away from the Duggar family in some ways, so it’s possible that having a big family isn’t a priority. Several women in the family gave birth in 2019, so there are very few that could be getting pregnant just yet. But, in a family this big, there’s always a chance that a pregnancy announcement is around the corner.

So, do you think Jessa will be pregnant soon? Or do you think someone else will be? Share your thoughts in the comments below.

’LPBW’: Audrey Roloff Gets Lost In Her Feelings Over This Picture
Lifetime’s ‘My Husband’s Secret Brother’ Is a Joey Lawrence Family Affair
Kendall Jenner On Her Hands And Knees At Met Gala
‘Prisoner Of Love’ Season 1 Finale SPOILERS!
Olivia Jade May Be Having A Tough Time In ‘DWTS’ Rehearsal Room