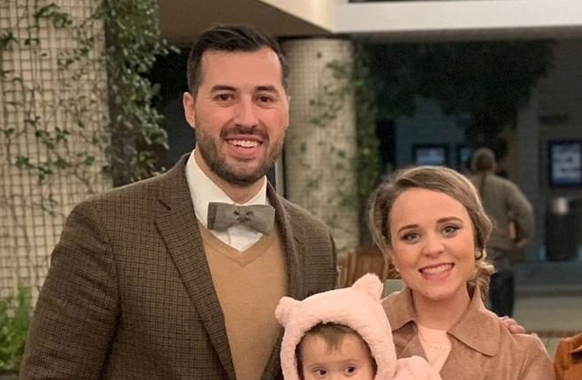 Because there are so many people in the Duggar family, it seems like someone is always pregnant. But, as of Wednesday, March 18, only one member of the family is expecting a baby. Joy-Anna Forsyth announced that she’s expecting her rainbow baby. She and her husband Austin previously lost a baby at 20 weeks gestation. She was giving herself time to heal from that loss. Aside from Joy, nobody else is expecting–at least, as far as fans know.

This is surprising to fans because there were a total of four births in 2019. Then, one baby came along in January 2020. They think that more women should be pregnant, especially the ones who didn’t give birth in 2019. Jinger Vuolo has a 20-month-old daughter. Jill Dillard’s kids are two and four. So, either one of them could be expecting soon.

Jill’s husband Derick previously joked that Jill might get pregnant during the coronavirus outbreak due to them staying in their home.

And, Duggar fans are wondering if Jinger will be expecting any time soon. She and Jeremy are not exactly like the rest of the family, so some fans believe they might not want a large family. They seem to be content with their daughter and they’re loving life in Los Angeles, California.

All kinds of rumors have been started about Jinger, Jill, and other Duggar women being pregnant. But, as mentioned, no one except Joy has announced a pregnancy. After a Duggar fan spoke out recently, the rumors about Jinger being pregnant might be put to rest.

As TV Shows Ace reported, a Duggar fan who is a server at a restaurant said the couple ordered alcohol. This came as a shock to fans of the couple because Jinger’s family doesn’t drink. They are both legal adults, and many fans agree that there’s nothing wrong with a drink or two. So, that’s not necessarily a problem, fans think.

Because of this, fans are beginning to think that Jinger actually isn’t pregnant. Despite all of the rumors swirling around, it’s possible that she and Jeremy are actually waiting to expand their family. Of course, there’s no evidence of this claim. There’s no way to know if the fan is telling the truth or not. It could be false. As the fan mentioned, they couldn’t get a picture because they were serving the couple. But, some fans are believing it’s true.

It’s also possible that Jinger isn’t pregnant yet because she wants to be different from her family. She has done several things in the past year that have proved she’s not the same as the rest of the Duggar family.

So, do you think Jinger is pregnant? Or, does the possibility of her and Jeremy drinking alcohol make you think she’s not expecting? Share your thoughts below.