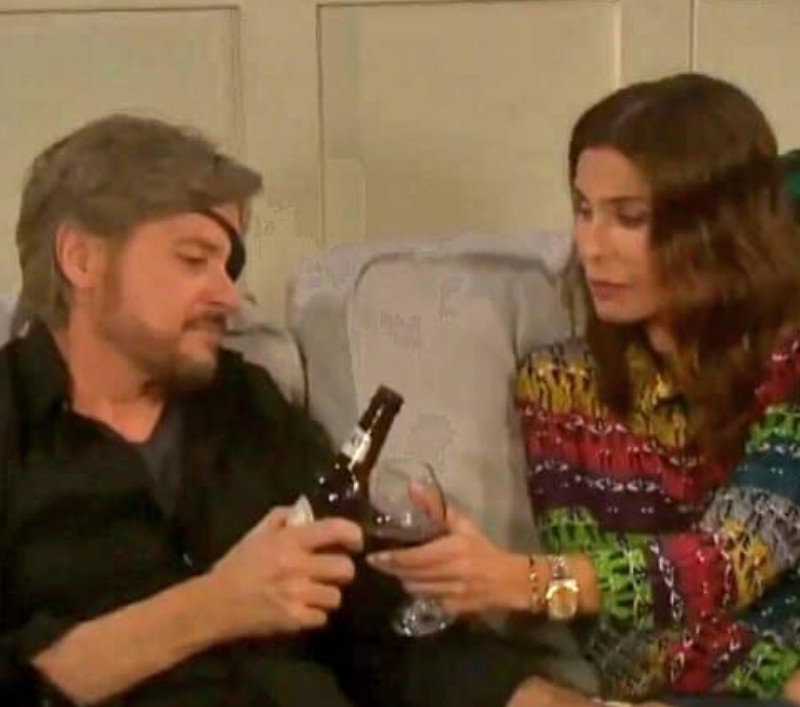 Things continue to heat up on Days of Our Lives as soaps head into May sweeps. TV Shows Ace reported last month that former soap publicist Alan Locher is hosting virtual reunions for defunct soaps ATWT and GL.

Check out his YouTube channel, The Locher Room, for a new reunion with Another World stars. Next week, he chats with One Life to Live stars.

Looking forward, what can fans expect on DOOL this week?

Sarah (Linsey Godfrey) ran into Rex (Kyle Lowder) in Paris last week. He tries to talk her into taking baby Mickey home but she refuses to give up ‘her’ baby. As fans know, ‘Mickey’ is really Brady (Eric Martsolf) and Kristen’s (Stacy Haiduk) daughter, Rachel.

To keep Rex quiet, Sarah ties him up and holds him hostage.

In the meantime, Lani (Sal Stowers) helps put Kristen on Sarah’s tail, even breaking her friend out of jail. Lani has to answer to Eli (Lamon Archey) for helping Kristen escape custody.

Gabi Plants a Kiss on Jake, Ben Gets a Beatdown

Brandon Barash is back on DOOL but is he playing Stefan pretending to be Jake or is he really someone else? Gabi fainted when she spotted Jake, but she recovers this week. Spoilers say that Gabi kisses the Stefan lookalike to convince him that he’s really Stefan.

Can she reignite the love she once shared with Stefan with this stranger?

Who is Jake and why are people after him?

With nowhere else to go, Steve (Stephen Nichols) moves in with Hope (Kristian Alfonso.) They are both trying to come to terms with their behavior when brainwashed. Hope thought she was Princess Gina, while Steve was brainwashed into becoming Stefano.

The unlikely pair bond when they destroy Princess Gina’s painting of Steve as Stefano. Meanwhile, Kayla (Mary Beth Evans) talks to Marlena (Deidre Hall) about her true feelings for Steve.

Will the supercouple reunite or is Steve destined for a new romance with Hope?

Xander confesses the baby switch plot to Maggie and lets her know that Sarah took off with baby Mickey. Maggie slaps Xander for his role in Victor’s scheme.

Tell us in the comments what you think about a possible Hope/Steve pairing.