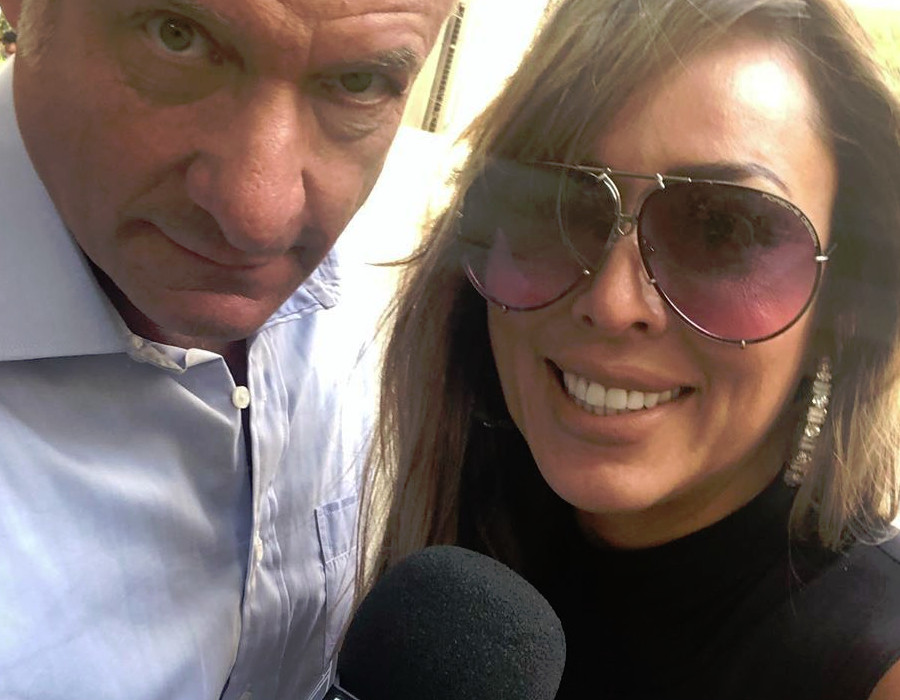 Fox News viewers got more than they bargained for earlier this week. The Real Housewives of Orange County star Kelly Dodd made an impromptu appearance during a live broadcast on Friday, April 3. See the hilarious footage down below.

As fans know, Kelly’s fiance is Fox News correspondent Rick Leventhal. They are currently in New York City where the coronavirus pandemic is hitting hardest. Hollywood Life reports that at the time of Kelly’s blunder, Rick was discussing the coronavirus crisis.

While her fiance talks the talk, Kelly walks the walk. Dressed in a white turtleneck and jeans under a long coat, Kelly casually crosses the street…directly into the view of the camera. Rick doesn’t seem to notice that his fiancee is photobombing (videobombing?) him in the background.

Kelly Gives the Double Bird Salute to Someone Off-Camera

Kelly walks nonchalantly into the shot for a few seconds. Then something or someone off-camera seems to get her attention. She begins making faces as she walks, looking somewhere off-camera beyond Rick.

Then, she flips off whoever is trying to get her attention. In typical Kelly fashion, she gives them a double bird salute before the shot cuts out. She clearly didn’t realize that she was on in sight of the camera or that the camera is on. Rick continues to report, oblivious to his fiance’s behavior.

For the most part, fans found Kelly’s antics funny. Many fans had one word to describe the footage: hilarious. One fan wrote that her husband would be “pissed” if she did something like this.

Another fan perfectly captured the moment with a comment that Kelly is “a hot mess.”

Not all fans found Kelly’s unexpected cameo funny. One fan wrote that they “hate” Kelly and questioned if she was drunk and/or on drugs.

Neither Kelly or Rick has commented on the incident.

As we mentioned, Kelly is in NYC with Rick during the coronavirus pandemic. Her teenage daughter, Jolie, is in California. Kelly posted on social media that her mother is watching Jolie while Kelly is on the other side of the country.

The RHOC star finally introduced her daughter to her new man a few months ago, TV Shows Ace reported in December. Kelly and the Fox News correspondent got engaged in November after dating for just a few months.

Kelly is reportedly part of Season 15 of The Real Housewives of Orange County. Bravo temporarily halted production due to the coronavirus outbreak. Check back with TV Shows Ace for updates on when your favorite shows will resume filming.

‘Sister Wives’: Who Is Kody Brown’s Son-In-Law Tony Padron?
Courtney Waldrop’s SPECIAL Sign From God, Life Has Never Been The Same
‘Below Deck Med’: What Made Lexi Wilson Fire Back At Producers?
‘OutDaughtered:’ Where Are The Busbys? Social Media Absence Explained
Kylie Jenner Shows Off Baby Bump In Little Crop Top