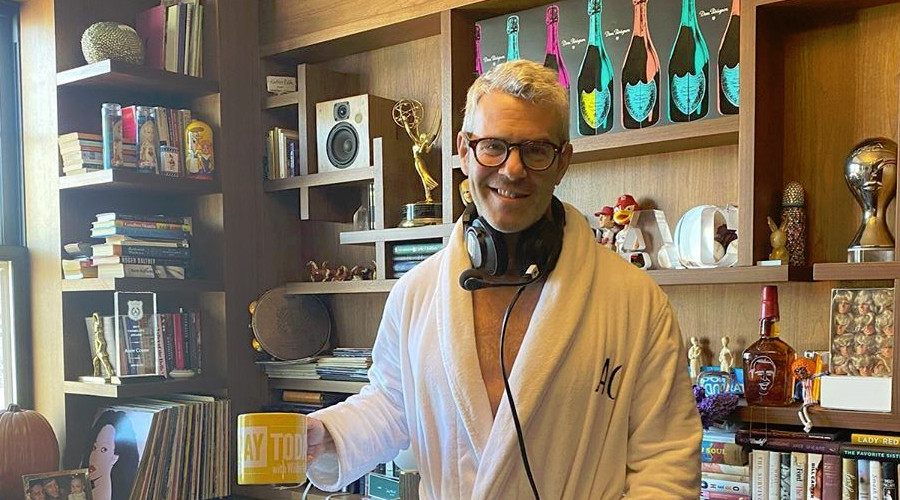 Bravo’s Andy Cohen is ready to get back in the saddle. Or the headphones, as the case may be. A week after his coronavirus diagnosis, the host extraordinaire is heading back to work.

Andy announced on Instagram on Monday that he was finally feeling better after testing positive for coronavirus. The Bravo exec shared the news of his diagnosis on March 20, TV Shows Ace reported.

He believes he contracted the virus through interaction with a neighbor who also tested positive. Andy was already working remotely with his radio station, Radio Andy. The network planned for Andy to video chat with stars for a virtual WWHL, People reports.

However, his coronavirus diagnosis put that plan temporarily on hold. While many networks have stopped production, some hosts are filming from home and interviewing guests on video chat. According to Bravo, that same technique will be used on WWHL.

Happy to report I’m feeling better and am returning to @radioandysxm this morning, and will try to end your day with a smile when we begin WWHL@Home tonight featuring @neneleakes @lisarinna @mrjerryo! THANK YOU TO EVERYONE ON THE FRONT LINES OF COVID-19!

The guests for March 30 are RHOA star NeNe Leakes, RHOBH star Lisa Rinna and self-confessed Bravolic Jerry O’Connell. The Real Housewives of Atlanta’s reunion episode is on hold due to the coronavirus outbreak.

The Real Housewives of Beverly Hills Season 10 premieres in a little over two weeks.

Tuesday night’s episode will feature an all-Vanderpump Rules guest list. Stassi Schroeder is joined by Brittany Cartwright and Jax Taylor. Andy is sure to ask Jax about his social media post from this week that claimed coronavirus is a “punishment” from God.

Musician John Mayer, a WWHL regular, is the only guest for Wednesday, April 1. Andy is asking fans on Twitter to send him questions to ask the Your Body is a Wonderland singer.

As with the regular broadcast, the new version of Watch What Happens Live ends the week on Thursdays. RHOBH star Kyle Richards guests, as does RHONY star Ramona Singer. The Real Housewives of New York returns to Bravo on April 2, airing right before WWHL films.

Joining Kyle and Ramona is RHONJ couple Joe and Melissa Gorga. That wraps up the first week’s guest list. Every guest will be appearing via video chat.

As TV Shows Ace reported, the worst part of having coronavirus for Andy was being away from his young son. Andy revealed to People that he was quarantined away from his son for “12 days or so.”

Might have a new co-host this morning! I’m live with John & Dan Rather at 10 on @radioandysxm… (listen in link in bio)

According to the WWHL host, the doctors gave him the okay over the weekend to see his son. However, Andy thought waiting an extra day would be better.

As a result, after the show airs on Bravo, Andy will see his son.

Watch What Happens Live airs Sundays through Thursdays at 11 P.M. Eastern on Bravo. The Real Housewives of Beverly Hills returns to Bravo on April 15.