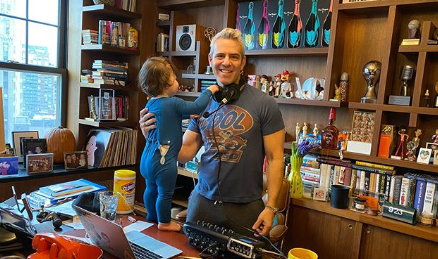 A nightmare for any parent is being away from their children. Bravo host Andy Cohen, unfortunately, had to go through that when he tested positive for coronavirus. On an episode of Sirius XM’s Jeff Lewis, he talked about some of the things he’d been going through.

Andy said, “I’ll tell you what I know from the nanny cam and from video. I can’t see him, which is the very worst part.” He’s speaking about not being able to spend time with his thirteen-month-old son. The baby is currently with a nanny.

After a few days of self-quarantine, and not feeling great, I have tested positive for Coronavirus.  As much as I felt like I could push through whatever I was feeling to do #WWHL from home, we’re putting a pin in that for now so I can focus on getting better.  I want to thank all the medical professionals who are working tirelessly for all of us, and urge everybody to stay home and take care of themselves.

What Has Andy Cohen Been Going Through?

Andy Cohen said he’s had a hard time while fighting the virus. He said his symptoms were really bad, including a lack of appetite. Once he realized he had the virus, he planned to work from home to keep Watch What Happens Live going. That didn’t last long though.

He Has Kept His Sense Of Humor Through It All

According to Fox News Andy Cohen joked that not having an appetite has been great for his figure. He two days ago, before I went to bed, I took a shower and I was walking into the shower and I looked at myself and said, ‘Holy s—t, you look great.” He also said he saw a picture of pizza and thought how much he wanted a piece.

He said, “when I get better, I’m going to gain so much weight.” The new episodes of Watch What Happens Live would have aired at the beginning of week.  The show’s interviews would have been with; Jerry O’Connell, NeNe Leakes and Ramona Singer.

The host said, “I want to thank all the medical professionals who are working tirelessly for all of us.” He urged everyone take care of themselves and stay home. Before he started feeling badly, Andy had said he was staying in and not letting people into his house. He had a neighbor who had the virus and he went to get them food and supplies. He made sure to mention he left them at the front door. Fans hope Andy recovers completely soon.

Todd Chrisley BLASTS Fans: How DARE They Question Savannah
‘Days Of Our Lives’ EXCITING Comings & Goings: Johnny DiMera All Grown Up – Rex Brady Back
Is This A Sign ‘Bringing Up Bates’ Will Be Canceled?
Chase Chrisley’s Girlfriend Emmy Medders Stuns In Sexy Black Bikini
Kailyn Lowry Opens Up About Weight Gain And Nasty Comments She Receives