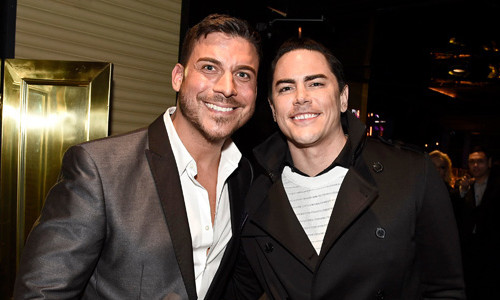 The wedding of the millennial is finally over on Vanderpump Rules. While Jax Taylor and Brittany Cartwright actually married in 2019, it didn’t air on-screen until Season 8. The lead-up to the wedding and the wedding were stretched over several episodes, stretching fans’ patience.

Where does Jax stand with former close friend Tom Sandoval now that the wedding is over?

How the Feud Got Started in the First Place

Sandoval and Jax met almost 20 years ago when they were both starting out as models. They became fast friends, even rooming together when they moved to the L.A. area. Both gained fame as bartenders on Bravo’s hit show, Vanderpump Rules.

Their friendship took a hit during the Season 7 reunion when Sandoval seemed to side with James Kennedy over Jax. By the end of the reunion, Jax was threatening to relieve Sandoval of his best man duties.

A few days after the reunion episode aired, Jax walked back his threat. All seemed to be fine until Season 8 began. In the very first episode, the two argued over Sandoval missing a pre-Bachelor party. They resolved the situation for the time being.

However, as the season progressed, Jax mentioned to Brittany several times that he was rethinking Sandoval’s role in his wedding. Ultimately, Brittany and VPR co-star Stassi Schroeder convinced Jax that he would regret it if Sandoval wasn’t at the wedding.

The SUR bartender now says he was bullied into the decision.

Jax Reveals He Hasn’t Spoken to Sandoval Since Last Summer

After the March 10 episode, Jax took the feud to social media. As TV Shows Ace reported, Jax slammed Sandoval for not letting Ariana’s brother work at TomTom because he doesn’t have the “right look.”

During a recent video chat with People, Jax implies that Sandoval is cut from his life entirely after “burning” him too many times in the past. While Jax stops short of calling his former friend a “bad person,” he doesn’t want Sandoval in his life.

While Jax and Sandoval have appeared together at events in promotion for VPR, that is their only interaction. According to Jax, he hasn’t “said one word” to Sandoval since the wedding.

Jax has his suspicions about why Sandoval chose to bring the pastor drama up while the cameras were rolling. He told People that Sandoval has nothing else going on in his life right now.

According to Jax, his VPR co-star was looking for a storyline this season, “plain and simple.”

Vanderpump Rules star Tom Schwartz is friends with both Jax and Sandoval. With the two at odds, Schwartz often finds himself stuck in the middle.

Reality Blurb reports that Schwartz tries his best to remain neutral. When asked recently about whose side he’s on, Schwartz said he’d have to “plead the fifth.”

Schwartz did wonder, however, if Jax and Sandoval are just too different to remain friends after everything that’s happened in the last year. He says,

Sandoval thinks he knows the problem between him and Jax. TV Shows Ace recently reported on Sandoval’s belief that Jax is “unreasonable.”

After slamming Sandoval on Twitter, Jax posted that he is done addressing the feud until the reunion. He plans to bring up Sandoval’s “lies” in person.

Tell us in the comments if you think Sandoval and Jax’s friendship is done for good.

Vanderpump Rules airs Tuesdays on Bravo. Watch the full People interview with Jax and Brittany below.