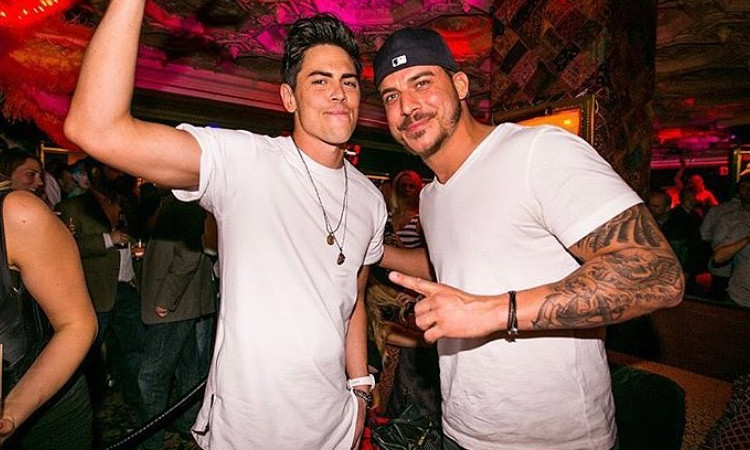 As viewers know, the once-bffs are feuding after Sandoval accused Jax of firing the homophobic pastor hired for the wedding only after boss Lisa Vanderpump brought it up. At the time, Jax claimed he fired the pastor immediately, but changed his story on Twitter.

Now Jax says the couple gave the pastor a second chance after the homophobic posts were first brought to their attention. However, when the pastor continued to post anti-gay messages, Jax claims that was when the decision was made to fire the pastor. So, Jax basically admitted Sandoval was correct in how it went down.

Talking about my pastor he apologized so we gave him the benefit of the doubt, and when we were told it happened again, I handled it. #pumprules I was just giving the pastor another chance people deserve chances. #pumprules https://t.co/S1C2ONiFNR

Jax took the first shot against his VPR co-star on Twitter. When a fan asked if Randall (Lala’s fiance) was out now that Sandoval was back in as best man, Jax doubled-down on regretting letting the TomTom co-owner stand up for him at his wedding.

I made a terrible mistake, should of went with my initial decision. #pumprules https://t.co/w7lbOzfxis

The first time Jax threatened to remove Sandoval from his best man duties came during a tense Season 7 finale. He threatened several more times during Season 8, but always changed his mind.

It was actually ex-girlfriend, Stassi Schroeder, who convinced Jax during a recent episode that he would feel bad later if Sandoval wasn’t there.

Jax relented but he has been quite vocal about his regret.

And then we were off to the races!

Jax’s next tweet directly attacked Sandoval for his treatment of Ariana Madix’s brother, Jeremy. According to Jax, Jeremy isn’t “allowed” to work at TomTom because he’s not good-looking enough.

How about the fact that Jeremy, Ariana’s brother can’t work at Tom Tom because Tom said, he doesn’t have the right look… are you fucking kidding me? What look do you need to have? #pumprules this is how you treat your girlfriends brother?

Fans may recall that Jeremy used to live with Sandoval and Ariana before they bought a house together. Despite that fact, Jax questions the way Sandoval treats Jeremy.

Sandoval Hits Back, Tells Jax to “Get Off My Nuts”

While Sandoval said during the early pastor saga that he’s rarely on social media, he was on Twitter Tuesday night to hit back at Jax. Sandoval shaded Jax for not tagging the people he was talking about directly.

Sandoval also had some choice words of advice for the former model: “stop posting fiction,” and “get off my nuts.”

When people talk shit about u and don’t @ u, or the people they r talking about..( @jeremymadix1 ) it should tell u a lot about who they r, and what they r saying… @mrjaxtaylor stop posting fiction, get a hobby, & get off my nuts, u little whiny bitch-

In response to Sandoval’s slam, Jax brought up the issue of Max Boyens still working at TomTom. As fans may recall, old, racist tweets from Max’s Twitter account resurfaced at the beginning of the season.

While Vanderpump Rules boss Lisa Vanderpump expressed her disappointment in Max, he wasn’t fired from her restaurants or the Bravo show.

Jax has been quick to point out what he perceives to be Sandoval’s hypocrisy in his reaction to the homophobic pastor compared to his response to Max’s tweets.

Reality Blurb reports that something goes down with Jax this season that will shock fans. According to Sandoval, Jax is attempting a “smear campaign” to cover up whatever happens later this season.

Jax isn’t the only one fighting Sandoval on social media. TV Shows Ace reports that VPR‘s Lala Kent went off on Sandoval and Ariana earlier this week.