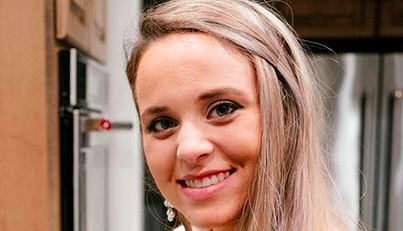 As TV Shows Ace reported, Jinger and Felicity Vuolo visited the Duggar family in Arkansas. Jinger and Felicity currently live in Los Angeles, California with Jeremy, Jinger’s husband. Since it’s far from Arkansas, they don’t always get together anymore.

This was a special visit for the family since they can’t see each other often. Throughout the trip, the family members documented Jinger’s return to Arkansas. They all spent quality time together.

Jinger hangs out with Duggar brothers

While Jinger seemed to spend most of her time in Arkansas with her sisters, she did decide to hang out with her brothers. She joined her brothers Jeremiah and Jedidiah to play a game of broomball.

In her Instagram stories, Jinger revealed that broomball is her “favorite sport.” Broomball is similar to hockey. Players wear regular street shoes on the ice and use a broom-like stick instead of a hockey stick. They use a ball instead of a puck.

From Jinger’s pictures, it looks like Jed and Jer are on their own team. Jinger got to join their team for a game. 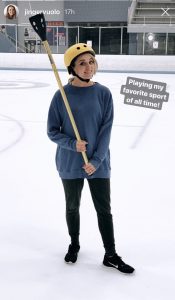 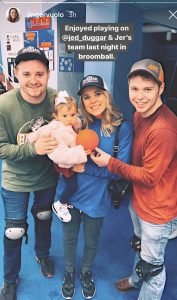 In his Instagram post, Jed also revealed that Jinger has “still got it” when it comes to broomball. Apparently, the family has played broomball for a while. In his post, he shared that he got to spend some time with his niece, Felicity.

When Jinger played broomball with her brothers, she didn’t wear a skirt. Fans of the family know that the girls are expected to wear skirts or dresses. Since Jinger has gotten married and started her life out in Los Angeles, she has broken some of the Duggar family’s rules.

According to TV Shows Ace, Jinger wore pants and a Jed Duggar campaign hat, as her brother is running for local office.

Why did Jinger and Felicity go to Arkansas?

While Jinger and Felicity were in Arkansas, the whole family documented the special time they had. They went out to breakfast. They went to Panera and out shopping. Based on the pictures, it looks everyone had a great time.

Fans aren’t quite sure why Jinger and Felicity made the trip to Arkansas. TV Shows Ace reported that it could’ve been for a number of reasons. The family could’ve been catching up. There could’ve been a Duggar family announcement. They also could’ve been filming for the upcoming season of Counting On.

What do you think of Jinger playing broomball? Do you like seeing her bond with her brothers, Jedidiah and Jeremiah? Share your thoughts below.