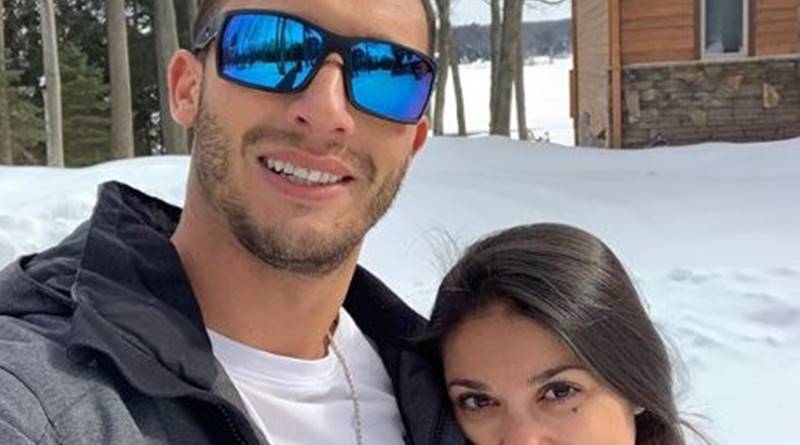 90 Day Fiance brought Alex Brovarnik and Loren to TLC several times. They appeared on Happily Ever After? Before that, fans saw them on season 3 of the show. Now married, and on vacation in the Bahamas, Loren revealed that Alex just saved a man who was drowning in the sea.

TV Shows Ace reminded viewers that Alex came from Israel. Meanwhile, Loren’s from New York. Needing to save up some cash, they moved to Florida where her parents lived. They married in 2105 and later did a gender reveal on their baby. They are expecting a boy. And, Alex finally got his US citizenship. Sometimes, things happen for a reason. If Alex and Loren never met, someone may have died in the sea at Nassau.

Loren shared a video of what went down. The 90 Day Fiance star noted that Alex saw a young guy with his friends. Obviously drinking too much, he nevertheless decided to go for a swim. Alex noted that he immediately got into trouble in the water. Loren noted that none of the friends even tried to help and they all just “stood and watched.” But Alex, something of a hero, went into the water to help him.

TMZ reported that Loren shared how someone filming it started cheering Alex on as he brought the unconscious man ashore. On Instagram, Lauren wrote all about the incident and warned her followers it looked quite graphic. The video showed Alex carry him face down through the shallows. Certainly,  the way he knelt to check his airways and things seemed to indicate the 90 days Fiance star had some good first aid training.

Then, once the man was on the ground, many other people ran to assist. But, if it hadn’t been for Alex’s quick thinking, it’s quite possible the man would have drowned. Loren wrote, “We are meant to be in a place in time for a reason! Alex and his friend Sean were meant to be at this beach, at this exact time because if not, who knows what could have happened!”

Naturally, the rather disturbing footage got a lot of views on Loren’s Instagram. Tom Brooks, fellow 90 Day Fiance castmate asked if the man survived. Well, it looked like he probably did, given that Loren said he saved a life. One fan commented that Loren’s gonna try and track the person down as he went to the hospital in an ambulance. Many people shared Loren’s pride in “their” 90 Day star. Here’s what some of them said about it:

SENSITIVE MATERIAL! MAY BE HARD TO WATCH!…READ WHOLE CAPTION…😭🙏🏼 My husband was watching a guy who was beyond intoxicated, who was with his “friends” who just stood there and watched! The man went into the water and about drowned! As you can see, Alex is dragging out his unconscious body while his “friends” did nothing! We are meant to be in a place in time for a reason! Alex and his friend Sean were meant to be at this beach, at this exact time because if not, who knows what could have happened! My husband saved a mans life today! And I couldn’t be more proud, yet not surprised at the same time! Meanwhile you can see this guys “friends” standing there and then walking away! NOT ONE OF THEM went in the ambulance with him either! It goes to show you may think your friends are your friends, but God forbid something bad happens, would then help you or just stand there and watch you fall?! Always trust your instinct!Please share this for awareness and KNOW YOUR LIMITS! THANK YOU @apache_6pac for recording this!! 🎥: @apache_6pac

Some critics think sharing the video was wrong

What do you think about Alex rushing to save the man? Do you think the others never reacted as they didn’t know lifesaving? Some people trolled on the post, saying they shouldn’t share it, or it’s not a good deed if they do. Do you agree with that? Or do you think it’s a blessing and a message that deserved sharing? Sound off your thoughts in the comments below.