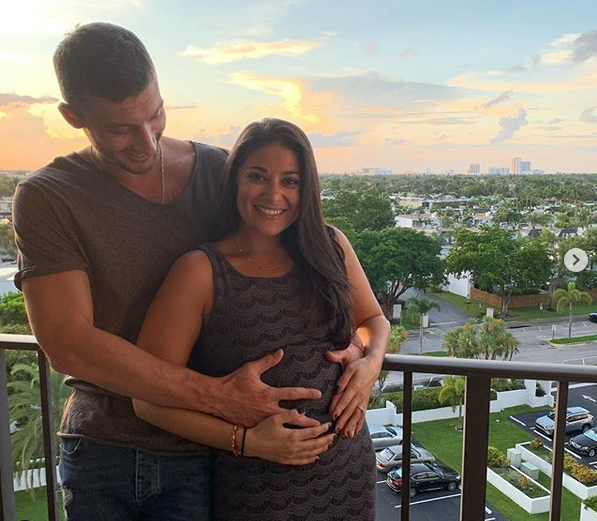 This is fantastic news for 90 Day Fiance fans of Loren Goldstone and Alexei Brovarnik. Last week, the beloved couple revealed they’re expecting their first child together in their respective Instagram posts. Loren has since opened up about her pregnancy journey. She’s been completely honest about her journey in a series of Instagram posts. The star always makes time for her fans on the social media app and doesn’t shy from any question that’s thrown her way.

She admitted that while it’s been difficult, she can’t wait to see their newborn baby. The 31-year-old talked about her pregnancy and her wishes for her first baby during a Q&A session with fans on Instagram Stories.

One of her fans asked her how she’s been feeling, to which she responded, “It has NOT been easy. Morning, day and night sickness. Nonstop nausea and constant migraines. Acne and changes I can’t control.”

Loren also revealed that she’s now allergic to ginger, so she has to avoid it. But she’s trying to take it easy. Loren has been practicing yoga and eating foods that are good for her and her body. Being excited about carrying her first child has been the motivating factor in her life.

Loren and Alexei revealed that they are expecting a baby on Oct. 29. The 90 Day Fiance: Pillow Talk star was absolutely beaming on Instagram Stories. As previously reported via US Weekly, Loren called that happy news “a surreal moment in our lives.”

She said that she’s a ball of nerves over becoming a mom. She’s nervous, terrified, and thrilled all at the same time. But Loren is proud to have Alexei by her side during this entire pregnancy. She also revealed that the first trimester was a challenge. Loren also learned that she and Alexei conceived their baby in Israel, which makes this milestone even more meaningful for the couple.

Loren has been upfront and honest about her pregnancy journey on Instagram. She said that she doesn’t care whether their baby is a boy or a girl. All that matters is that the baby is perfectly healthy. Of course, Alexei would love to have a little boy, but Loren feels in her soul that she’s having a girl.

As for what Loren misses while pregnant, Loren said a “Publix turkey sub.” She also misses drinking wine, eating sushi, and having her White Claws. After the Q&A session, Loren confirmed that their future child will have dual citizenship in both the United States and Israel, where Alexei is from.

The 90 Day Fiance: What Now? 21-episode series featured the couple disagreeing on when is the right time to start their family. Alexei finally agreed to have a baby, but only under one condition. He agreed to start their family in mid-2020. Loren wanted to start in October 2019, but Alexei wasn’t compromising because he thought she would get pregnant right away, in which he ended up being right.

As previously reported via TV Shows Ace, the couple later made an appearance on Pillow Talk, where Loren was seen drinking a clear liquid in most of the episodes. That caused the baby rumors to swirl. But Loren told fans on Instagram that she was not pregnant when they were filming episodes for Pillow Talk. In fact, they were still trying to get pregnant. And it was their trip to Israel that finally made it happen.