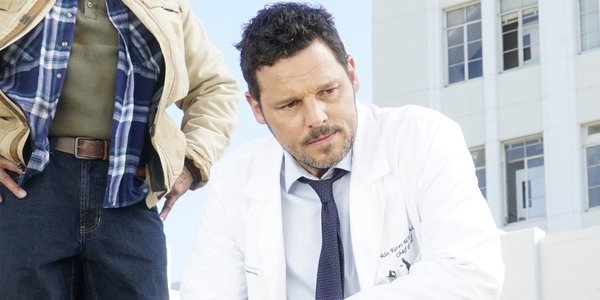 Alex Karev has been MIA on Grey’s Anatomy for a number of weeks now. We already know that Justin Chambers is not returning in the remainder of Season 16. So, when can we expect to find out what happened to the fan-favorite?

The docs at Grey Sloan have not exactly been quick to address Alex Karev’s noticeable absence. After all, his wife Jo (Wilson) Karev remains in Seattle as a rising surgeon. Now that more time has passed and Pac-North’s doors have been shut, there’s really no avoiding the question – what is Karev really up to?

*Be warned that this post will discuss spoilers from Season 16, Episode 14.*

What we know so far

Alex Karev was initially written off screen with the explanation that he had to go to Iowa to help out his schizophrenic mother. In fact, fans have met her a few times since Season 14. However, what appeared to be a one-week absence turned out to be permanent. Jo Karev and the rest of the Grey Sloan staff still aren’t aware they will likely never see him again.

Thursday’s episode, “A Diagnosis,” continued the speculation when Jo called Alex, but she was once again sent to voicemail. She broke down while pleading for him to explain what has been going on. Elsewhere, Meredith texted Alex with no response when DeLuca apparently broke up with her. One thing’s for sure: Jo and Meredith need their person!

What can we expect on Grey’s Anatomy going forward?

After weeks of silence, Grey’s showrunner Krista Vernoff opened up to Variety to reveal how we will find about Karev’s departure. She stated, “It was a very careful threading of a needle, where we are giving a little bit of information and pain to Jo.”

Vernoff noted that it’s going to take a “quite a few more episodes” to find out the answer, but we will of course know by the season’s end. The storyline proved to be a fun challenge to the writers as they didn’t want to put Jo through more turmoil after her struggles in Season 15.

I think it’s safe to say the fans are glad to hear Jo likely won’t sink back into her dark place, though we still aren’t sure how they will make sense of Karev staying in Iowa while Jo remains in Seattle. Or will she? There’s yet to be any indication that Jo will be written off of Grey’s Anatomy too, but anything seems to be possible this season.

What are your predictions for Karev’s whereabouts? Do you think Jo will stay at Grey Sloan?

If you missed Episode 14, be sure to catch up on Hulu. New episodes of Grey’s Anatomy air every Thursday on ABC at 9pm ET.