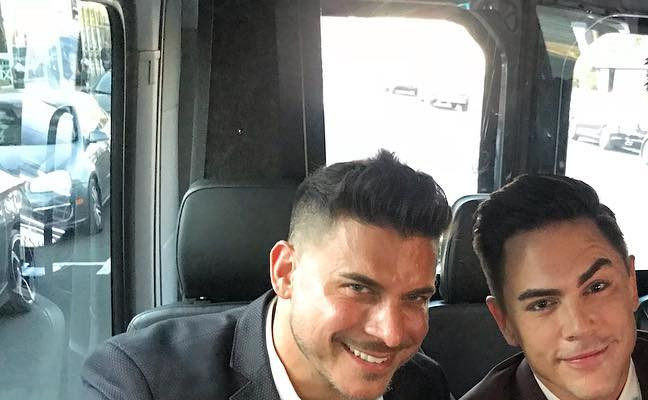 The feud between Vanderpump Rules stars Tom Sandoval and Jax Taylor isn’t ending anytime soon. The former best buds’ friendship began to crack at the Season 7 reunion. Sandoval and girlfriend Ariana Madix stood up for co-star James Kennedy against attacks from all sides. In response, Jax and then-fiance Brittany Cartwright threatened to remove Sandoval from their wedding party.

Cooler heads prevailed and Sandoval kept his role as co-best man with Tom Schwartz. However, things have been tense between Sandoval and Jax ever since. TV Shows Ace reported a few months ago that Ariana and Sandoval are blocked from Jax’s social media accounts.

Jax has hinted in the past few weeks that Sandoval does ‘something’ unforgivable leading up to his and Brittany’s wedding last summer. As Vanderpump Rules is filmed a year or more in advance, the drama is playing out on the current season.

The February 18 episode heavily featured Jax and Brittany’s reaction to learning that the pastor they hired for the wedding has a history of anti-gay comments. The couple ultimately fired him and pop star Lance Bass officiated the wedding. However, fans are now seeing that it took Lisa Vanderpump bringing up the situation before Jax and Brittany acted.

Sandoval questioned Jax about the discrepancy, leading Jax and Brittany to freak the eff out on him. The other cast members, save girlfriend Ariana Madix, sided with the engaged couple. During this week’s episode, Brittany and Jax both floated the idea again about stripping Sandoval of his best man duties.

Jax Taylor Regrets Having Sandoval at His Side for Wedding, Sandoval Reacts

TV Shows Ace reports that Jax recently expressed regret over giving in to pressure to keep Sandoval in the wedding. According to Jax, if he could do his wedding over, Sandoval would be there as a guest only.

Speaking to Us Weekly, Sandoval recently spoke out about how Jax’s regret made him feel. The TomTom co-owner said it ‘hurt his feelings’ that his former friend thinks that way. Sandoval also encouraged fans to keep watching because the drama isn’t over yet.

During the first episode of Season 8, Jax was upset that Sandoval skipped out on his pre-bachelor party for family obligations. Sandoval notes the hypocrisy of Jax expecting everyone to drop their plans for him. He says,

“I didn’t see Jax really do much of anything for Schwartz’s wedding. But for some reason, he expects everybody else to move mountains for him and his wedding and, like, be available on call at any time of the day, any hour of the night.”

Sandoval also takes issue with Jax putting down his relationship to Ariana. In a recent interview, Jax predicted the couple’s breakup with the next few years.

Sandoval isn’t letting the situation with his VPR co-star affect his life. Speaking to People at a recent event in Atlantic City, the bar owner opens up about his plans with Schwartz for the future. The dynamic duo would love to open a ‘seedy’ bar someday.

The former model feels that he and Schwartz are the “heart and soul” of the West Hollywood bar they own with Lisa Vanderpump, TomTom. He recently shared a photo on his social media of a popular 90s heartthrob’s visit to the establishment. No, not Lance Bass. None other than Cory Matthews himself, Ben Savage.

Keep watching Vanderpump Rules to see how Sandoval ‘makes it up’ to Jax at the wedding for missing some of the earlier festivities. The reality show airs Tuesdays on Bravo.

New ‘Bachelor’ Couple Heads To ‘BIP’ Amid Alleged Dating Rumors
‘Bachelorette’ Preview: Katie Warns Clout-Chasers To Get The Eff Out
Duggar Cousin Amy King Offends All Her Male Followers With One Post
Savannah Chrisley Spills Secrets To Her Perfect Complexion
Savannah Chrisley Gets Scolded By Fan For Wearing Barely Nothing?