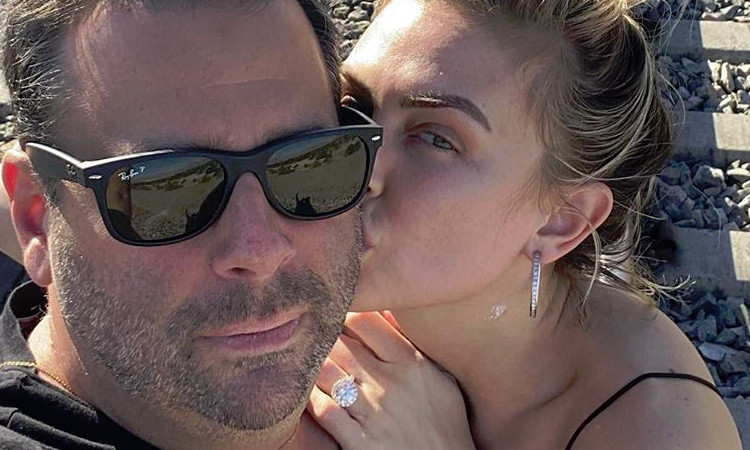 Vanderpump Rules star Lala Kent and fiance Randall Emmett must be glad the wedding drama happening on the show isn’t their wedding. Co-stars Jax Taylor and Brittany Cartwright married last summer. The stress of the wedding and feud between Jax and Tom Sandoval are playing out for the world on Season 8 of the Bravo show.

Jax and Brittany aren’t the only VPR cast members with marriage on the horizon. Lala Kent announced her engagement to film producer Randall Emmett a few months ago. Stassi Schroeder is also planning a wedding later this year to Beau Clark. However, Lala’s wedding is right around the corner and she couldn’t be happier.

Lala’s fiance may be looking forward to the couple’s wedding even more than she is. Two weeks ago Randall posted an outtake from the pair’s engagement shoot. Lala is sleek in a white blazer and tight, black pants.

In the photo’s caption, Randall noted that the wedding date, 4/18/2020, was just 75 days away. TV Shows Ace reports that Lala made a similar tribute around the same time, saying she couldn’t wait to be Randall’s wife.

The marriage will be Lala’s first. Randall was formerly married to actress Ambyr Childers, with whom he shares two children. Lala and Ambyr recently buried their years-long feud.

Randall and Lala received a perfectly-timed Valentine’s Day delivery. The invitations for their upcoming wedding finally arrived. Emmett gave fans a brief glimpse by posting a video of the invitations on his Instagram account.

In the video, the camera zooms in and out of the invitations then pans to Lala. Bravo writes that the SUR hostess excitedly says, “It’s happening!” Randall notes in his caption that the wedding countdown is now 60 days.

Happy Valentine’s Day to us, we just got our wedding invitations!! 60 days till lift off

Before the Vanderpump Rules Season 8 premiere, Lala revealed that she finally convinced Randall to appear on the show with her. Throughout her time on the show, she has only referenced her now-fiance. He was never filmed on camera.

However, the couple wants to give fans a look at their relationship. He has yet to make his big Vanderpump Rules debut, but he definitely will this season.

Randall is a big-time Hollywood producer. His company produced the Oscar-nominated film The Irishman. In fact, Lala was able to meet famed director Martin Scorsese at the Academy Awards.

After producing a string of successful movies, it seems Randall is trying his hand at directing. He took to his Instagram account to announce some Hollywood heavyweights for his directorial debut.

Reportedly, Megan Fox and Bruce Willis are set to star in Randall’s film, which he wrote he is “so grateful.”

Lala has said in the past that Bravo’s cameras won’t be filming her wedding.