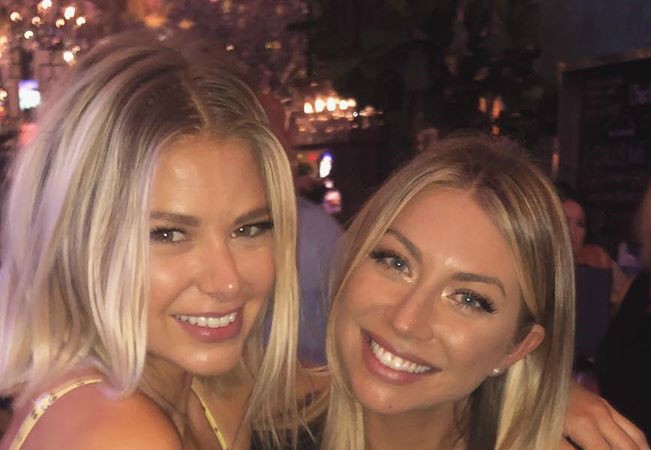 Forget the pasta – Vanderpump Rules is all about the feuds this season. The fallout of the ‘Witches of WeHo’ friendship is happening right before our eyes. Things are so tense between Stassi Schroeder and Kristen Doute that the latter may not be invited to Stassi’s wedding later this year.

Kristen isn’t the only one Stassi butts heads with this season. During a book signing event for her best-selling book, Tom Sandoval got into a screaming match with the former SURver. Sandoval was upset because he wasn’t involved in the party planning.

Rather, Stassi got permission from Lisa Vanderpump and enlisted Tom Schwartz’s help in ironing out the details. The party was held at TomTom, which both Toms own a small 5% of, along with Lisa.

What is Sandoval’s Problem with Stassi?

During an appearance earlier this week, Stassi fielded a question from a fan about Sandoval’s behavior. As fans know, the former model sent Stassi a nasty text a few hours before the party. A text Sandoval’s girlfriend, Ariana Madix, advised him not to send.

The fan asked Stassi if she thought the couple were jealous that Stassi’s book sold more copies than their Fancy AF Cocktails book. Her response was both diplomatic and mature. She pointed out that at the time the argument was filmed, Sandoval and Ariana’s book hadn’t been released yet.

“It was a totally different type of book so we can’t even compare them and their book hadn’t even come out yet.”

Stassi goes on to say that Sandoval simply doesn’t like her and never has. She recalls that they’ve had issues since the very beginning of Vanderpump Rules. While Sandoval may not be jealous of her, Stassi definitely doesn’t think he has any love lost for her.

For many seasons of Vanderpump Rules, Ariana and Stassi did not get along. The two worked out their issues enough to have a joint birthday party during Season 7. Despite their friendship, Ariana took Sandoval’s side in the argument in TomTom.

TV Shows Ace reports that more VPR drama is coming this season between Ariana and Stassi. However, the two are still friends, Reality Blurb reports. At least according to Stassi. She says,

I love Ariana. I do. But when she sticks up for Sandoval when I feel like he’s wrong, it pisses me off.”