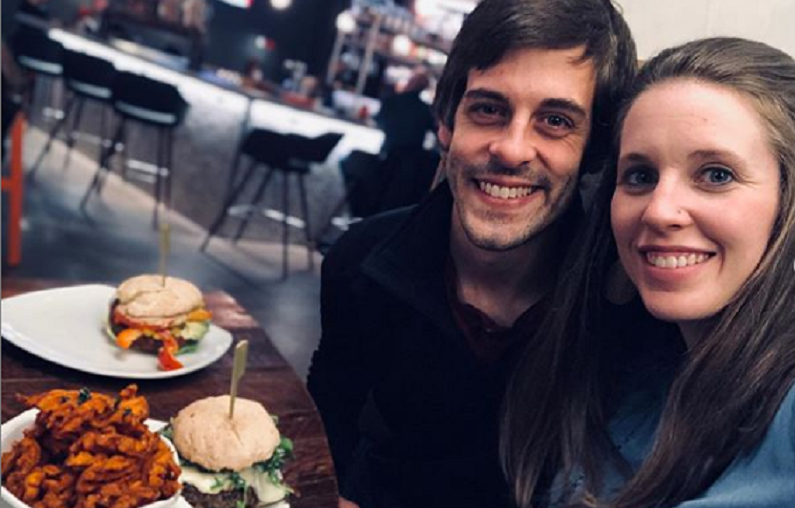 Jill Duggar has the perfect response to fans who think she’s pregnant. But, it spawned a new controversy. On Wednesday, Feb. 5, Ben Seewald’s sister Jessica Lester posted a picture of cheese and wine. The girls bonded over wine and cheese on social media, which is causing outrage among fans. This comes a few years later after her Valentine’s Day controversy.

Fans are shocked over the latest photo since the Duggar family avoids alcohol at all costs. Jim Bob and Michelle Duggar don’t even let their kids drink booze on their 21st birthday. Jill’s interaction with Jessica’s photo has fans wondering if she’s rebelling from her family. It’s clear that the parents still have control, even if most of their kids are adults. As TV Shows Ace reported, Jim Bob was a chaperone at Jana Duggar’s Las Vegas trip with her girlfriends.

As In Touch Weekly reported, Jessica Lester posted a photo that featured a full glass of red wine. There was also some cheese and coasters with wine quotes on them. One of them read: “Wine is the most civilized thing in the world,” which is a quote from Ernest Hemingway. Another quote read: “Wine is constant proof God loves us,” which is from Benjamin Franklin.

Jill Duggar commented on Jessica’s post. She made it clear that she was there for the cheese, not the wine. Jim Bob and Michelle Duggar are Christian fundamentalists, which means they’re strict about their no-booze policy. They would rather turn wine into water instead of the other way around.

In the comments section, fans encouraged Jill to try some wine. However, Jessica isn’t the only friend Jill hangs out with who loves a glass of wine. Her best friend, Rachel Virden, makes it known on her Instagram bio that she “loves Christ, [her] family, post-it notes and red wine.”

Will Jill Duggar be accused of drinking alcohol again on Valentine’s Day?

Of course, this has happened before. And, it happened around the same time. Back on Valentine’s Day 2018, Jill first shocked fans when she got her nose pierced, as In Touch Weekly reported. Then, on Valentine’s Day, she shared a photo with what looked like alcohol at first. She posted a photo of her husband Derick Dillard with a nice spread on their dining table. Some fans thought he was holding a bottle of wine or champagne.

My hubby is the best! He totally turned our house into a steakhouse, serving me a wonderful Valentines Day dinner last night! #besthubby @derickdillard I love you babe! 💕💘💓💗💞

Alas, it was only a sparkling juice drink. Fans called them out for pretending to act like adults even though they don’t drink.

“That’s cute that you guys pretend to drink alcohol like you’re kids hahaha,” another fan remarked.

It looks like Derick and Jill follow the Duggars’ strict no-alcohol sobriety. It would be very controversial if the couple cracked open a bottle of wine this coming Valentine’s Day. But, it doesn’t stop Jill from making friends with wine lovers. And, it also hasn’t stopped the rumors that Derick likes to drink behind closed doors, as reported by TV Shows Ace.

What are your thoughts on Jill Duggar and Jessica Lester’s wine photo? Do you feel it’s such a big deal? Sound off below in the comments section.

Don’t forget to check back with TV Shows Ace for the latest news on the stars of Counting On.