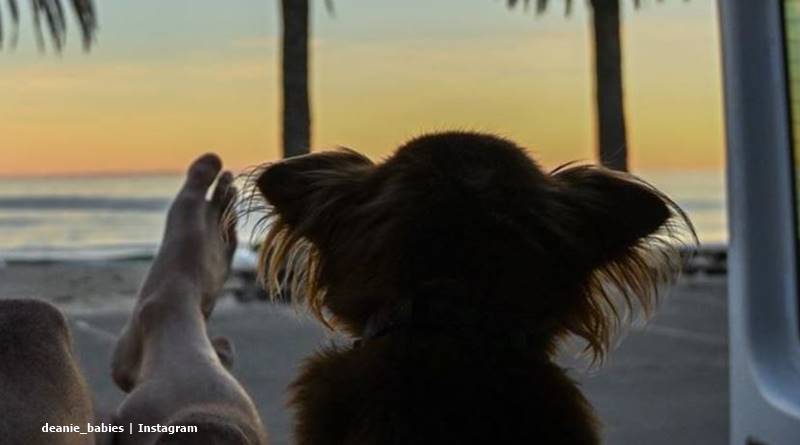 BIP stars Dean Unglert and Caelynn Miller-Keyes fostered a cute little dog named Pappy. Immediately, fans noted that he looks like Yoda. Dean’s out and about traveling again as his broken leg recovers and Pappy’s been with him. Pappy sitting by the fire, Pappy in the RV at the beach, Pappy looking like he found dog heaven gets him more and more fans. And now, they just want a commitment from Dean. Plenty of them ask him to just adopt Pappy, the Yoda lookalike, already.

TV Shows Ace reported that Dean and Caelynn both went onto social media to welcome Pappy into their lives. Not a young dog, on her Twitter, Caelynn noted that they fostered him for “a little bit.” So, we wondered if, in the long run, it would “end up a happy story for Pappy.” We also wondered if Pappy would adapt to a roaming lifestyle. Well, it looks like he’s doing fine.

In a follow-up article, we noted that Dean “ditched the RV for a while.” He shared photos of him and Pappy when they stayed in a BNB called The Gaslight Joshua Tree. Pappy looked right at home sitting next to the fire with Dean. Back then, BIP fans already started pleading with Dean and Caelynn to keep Pappy. They hope they adopt the dog instead of just fostering for a while.

Cheatsheet reminds readers that Pappy’s a “senior dog.” Not young in years, the little fella ended up in a shelter. Dean and Caelynn saw him in two separate shelters. At the first one, they couldn’t see him for some reason. But the next day, they saw him elsewhere. Feeling it was a “sign,” they took him home. But, only temporarily. Dean stressed that when he said on his Instagram, “this is my first time fostering and i already know it’ll be so hard to give him up so, in the meantime, we’re gonna give him all the love we can.”

Now, Dean took Pappy along to Refugio State beach. He shared a photo of the beach, palm trees, and the sea. Silhouetted, is Pappy looking out over the scenery. Well, Pappy looks so much like Yoda, that hundreds of fans commented on that, but equally, many people pleaded with the BIP star to become a “foster failure,” and just adopt Pappy already.

driving up the coast, stopped to stretch our legs.

The pleas of Bachelor In Paradise fans

Just to give you an idea of how badly fans want for Dean and Caelynn to keep Pappy, here’s a few comments by BIP fans:

Those pleas to Dean are just a fraction of the total number that came in. What do you think? Do you think they’ll keep Pappy? Right now, neither of them responded to fans who beg them to keep the dog. Sound off your thoughts in the comments below.

‘The Voice:’ What To Expect From Season 20, Episode 1 And When Does It Air?
Is Janelle Brown The Only ‘Real’ Wife In Kody’s Life?
Is ABC Ready To Announce The Next ‘Bachelorette’ During Chris Harrison’s Interview?
Candace Cameron Bure Flaunts Trim Physique In Sexy Lime Bikini
Jenna Johnson Gets Unexpected Visitor While She And Val Are Away