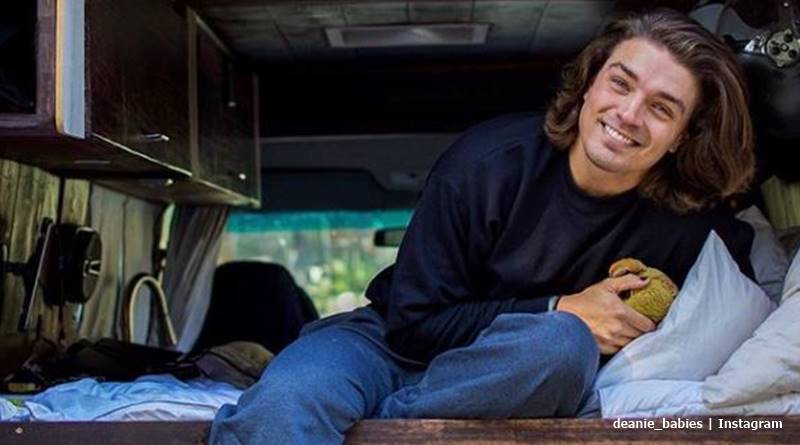 BIP star Dean Unglert just returned from Europe where he landed in the hospital after a Swiss skiing accident. Safely back in the USA, he and Caelynn Miller-Keyes decided that fostering a dog might be a great idea. So, they went off to find a furry friend. Now at home with them, Dean explained why they chose this particular dog, that looks a bit like Baby Yoda.

Taking to Instagram this week, Dean shared a photo of the new dog. Pappy looks like an elderly pomeranian or cross. No spring chicken, fans agree the dog looks a lot like Baby Yoda from The Mandalorian. In fact, Caelynn Miller-Keyes posted about that over on her Twitter. Dean captioned his post with, “this little dude is the coolest!” Previously, the couple mentioned wanting a dog, and people made recommendations for a rescue animal.

Dean noted that they saw Pappy in two different shelters. First, they went to the “west LA animal shelter” and they saw Pappy there. But Dean explained that for some unclear reason, they couldn’t spend time with him. But, they later went to Wags and Walks Rescue. The place is known for saving dogs from “high kill shelters,” according to their Instagram profile. There, the BIP stars saw pappy again. Dean said, “we took it as a sign and took him home as fast as we could.”

this little dude is the coolest! when we first mentioned we wanted to foster a pup we received so many fantastic recommendations on where to go. the first day we went to the west LA animal shelter and met a lot of amazing dogs but none that would be good for me given the state of my leg. we actually saw pappy there too but couldn’t see him for some unknown reason. the next day we paid a visit to @wagsandwalks and, lo and behold, pappy was there! we took it as a sign and took him home as fast as we could. this is my first time fostering and i already know it’ll be so hard to give him up so, in the meantime, we’re gonna give him all the love we can. if you’re thinking about getting a pup, please consider adopting or fostering. there are so many pups that have so much love to give, all they need is a chance!

Dean thought Pappy the perfect dog after his skiing accident

In his caption, Dean explained that they went along to Wags and Walks because they couldn’t find the right dog after his accident. TV Shows Ace reported that Dean suffered a bad accident in the Alps. Requiring a plate and crews for his fractured femur, he stayed extra time in London. Apparently, blood clot risk after surgery means airlines don’t always allow people to fly immediately following surgery.  Dean’s still healing, and can’t really spend time with a large and boisterous dog.

Bear in mind, BIP‘s Dean also travels a lot and lives out of his van. So, a smaller dog might better fit his lifestyle. Cheatsheet noted that fans don’t hear much about how Caelynn Miller-Keyes and Dean plan their lifestyle or live their lives. Dean’s careful not to post too much about that for their own privacy. But, he and Caelynn certainly post plenty of pics of his new furry friend.

Meet our baby yoda (pappy) that we’re fostering for a little bit! pic.twitter.com/NN4Ak9u9oB

Is Pappy, the furry friend set for a traveling lifestyle?

Fans love that the two Bachelor In Paradise stars decided on a rescue dog. Many of them hope they plan some way to fit the dog into their travel plans. Actually, the BIP couple travels a lot, so that’s a good point. And, note that Cealynn said on Twitter they fostered him for “a little bit.” So, this might not end up a happy story for Pappy in the long run.

What do you think of Pappy? Do you think they’ll take good care of him even roving around in a camper van? Sound off your thoughts in the comments below.