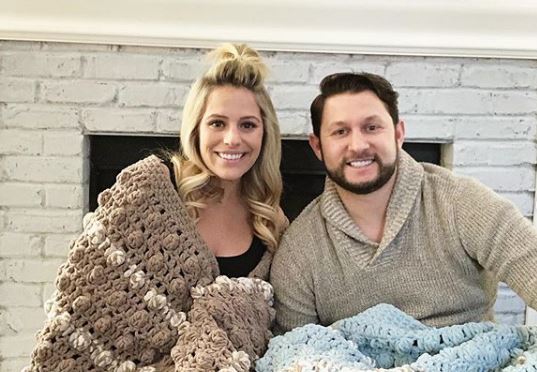 Thursday night, January 17, brought another Couples Couch crew to give their commentary for Season 10’s Married at First Sight couples.  Along with regulars, Anthony D’Amico and Ashley Petta and Keith DeWar and Kristine Killingsworth, the Married at First Sight and Couples Couch ambassadors, Jamie Otis and hubby, Doug Hehner were on board, as well as Season 8’s successful couple, AJ Vollmoeller and Stephanie Serson.

Jamie Otis may have less input with Married at First Sight’s on-air broadcasts with the couple’s baby boy on the way, joining big sister, Henley Grace.  Jamie and Doug have been enjoying a much-needed “babymoon” together, according to Daily Mail reports, and are still mulling over the best names for their soon-to-be welcomed son.  The baby is due in May.

The drinking, the debating, and suspicion of dubious motives were all in the mix for this Couples Couch and at least there were no “awkward” silences.

It’s another ‘Couples Couch’ drinking game for Ashley and Anthony

Both Ashley and Anthony seemed dubious about Zach’s character, but Ashley doesn’t mind looking at him one bit.  Keith DeWar also shaded his wife’s eyes during the shirtless view in the honeymoon suite featured for this Couples Couch.  Anthony doesn’t seem to like much about the southern-born Justice at all, but he is, after all, jealous of Zach’s perfect “waft” of hair and his mastery with a round brush.

AJ teased that he bet Zach said “Zach attack” every time he entered a room.  AJ also didn’t care for the “don’t come to our gym” reference during the toasts at the wedding.  After seeing Zach’s romantic proposal and meaningful words to his new wife throughout their special day, however, AJ warmed to Zachary.  As Mindy and Zach departed, AJ cautioned to the screen, “Don’t give me a reason to change my mind, buddy!” All of the veteran couples were in support of Mindy, walking herself down the aisle and wanting desperately to always “have your back” as she told her new husband.

Doug admitted that he was envious of Zach, but could never have the same perfect hair as this groom.  “It would be so heavy, I would just fall over,” Hehner demonstrated.

@MAFS_Original I watched Married at first sight couples couch. I loved it, have to stay on trend with them! I laughed all night. The past season couples were the bomb! Especially the one that did the drinking game and the black couple. Let's do that again! #marriedatfirstsight

Chalk it up to hormones and having a hard time with pregnancy sleeping, but for whatever reason, Jamie Otis really criticized Zach’s every move, from his question to Mindy: “Why are you here?” during their first toast, to asking her bridesmaids about one important, unusual thing about her that he could understand.  “Why would he ask that?” Otis questioned again and again.  At the same time, she seemed to admire the maturity and composure of the couple, even if not understanding it.   Jamie also saw almost everything as a “red flag” during this broadcast.

Jamie even contended that Derek Sherman calling his bride, Katie Conrad “awesome” instead of “hot” was somehow a slight.  Nonetheless, she was sure about these two finding their “fire” on the honeymoon night, and so was her husband.  The veteran couples blushed while viewing the intimacy assault launched against Derek by Katie’s bridal party, but it also brought a lot of laughs.

“She’s marketing herself right there,” AJ assured of the most forward of the girls.  “That’s the kind of lover she wants to be.”

It’s always a joy to hear from Keith and Kristine, because the two always seem supportive of every couple, without too much judgment.  Keith even tried to empathize with Brandon Reid, the groom who has already made the move to annul his marriage to Taylor Dunklin.  Keith naturally observed that Brandon was “lit” and it was especially ironic to hear him tell his mother-in-law that he wasn’t “just in it for the nine weeks.  Taylor and Brandon are the first Married at First Sight couple not to make it to the airing of all their episodes for a season.  We can only wish them love and the best for the future.  Jamie saw Taylor as being “skeptical” in all her comments.

The whole crew is rooting for Jessica and Austin, too.  Everyone loved the “upstairs, downstairs” wedding encounter in the ladies’ room with Mindy and Jessica, joyfully mimicking their glee.

Ashley may be right about the wedding night passion between Derek and Katie, but she still thinks that old boyfriend will somehow spoil the party.

Stephanie couldn’t pick a favorite couple yet but she certainly cried over Zach and Mindy at the altar.  AJ declared that Meka was one of his favorites by the end of the show. He also admitted that he didn’t remember his first night with his wife.

After the snippets of future conflicts from the previews, every Season 10 Married at First Sight pair is going to need support and prayers from the Couples Couch and from everyone on their couches at home, too.