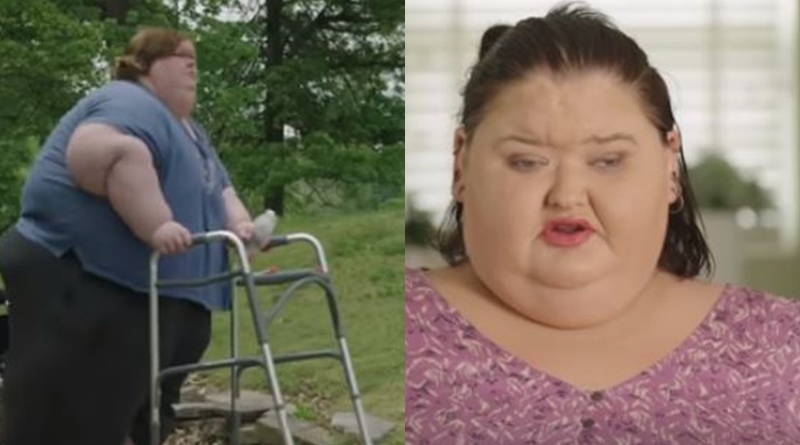 1000 Lb Sisters Amy and Tammy Slaton are featured on the TLC network. Fans watch them as they attempt losing a joint 1,000 pounds for life-saving surgery. Tammy’s need is desperate, as she can’t manage without a walker, and even attempted suicide. But, on their social media, it looks like they managed some weight loss. Now, they shared their delight at making their local news headlines.

Ahead of the weekend, Tammy Slaton took to her Twitter and shared a screenshot of the paper. She didn’t caption it, but fans can hear her say. “We’re on the front page!” The video showed the headline, which read, “Sisters weight-loss struggles feature in new series.” Fans reacted to her post. One wrote, “I’m trying to lose weight due to depression so I know how challenging it can be. Just wanted to let you know that I’m so proud of you. You really touched my heart in ep2 best of wishes to u. You’ve got this Tammy 1lv.” Others sent their congrats as well.

Meanwhile, over on Instagram, Amy shared her news with 1000 Lb Sisters fans. On the post, she shared a screenshot of the front page. She captioned it with, “We made the front cover. #1000lbsisters #tlc.” Many more people commented on Amy’s post. One said, “You guys have received so much hate that I hope by the end of it all you really [stick] it to them. I related so much to your story of not having much family support and being bullied. Still a big girl. Im rooting for yall! ❤️.” Others told them they watch the show and really hope they achieve their goals.

The photo in the local news showed them as fans see them on the TLC show. But, TV Shows Ace reported that Amy shared a comparison photo of her self. She looks much smaller than she started out. The two pictures showed one from last year and another from 2020.

Meanwhile, on her Facebook, Tammy updated her profile recently and she has also slimmed down. The 1000 Lb Sisters star told her fans that she’s also dating someone. Fans of the show really hope their journey brings them freedom from bad health. They have already shared YouTube videos for some time. There, fans saw them eating loads of marshmallows. But, The Blast notes that despite already achieving a bit of fame, the “Webster County, Kentucky newspaper ‘The Journal-Enterprise'” feature really gave them some delight.

Did you ever get featured in your local newspaper? If you did, possibly, you can understand their excitement. There’s still something special about being one of the local faces in print. Sound off your thoughts about Amy and Tammy Slaton’s reaction in the comments below.