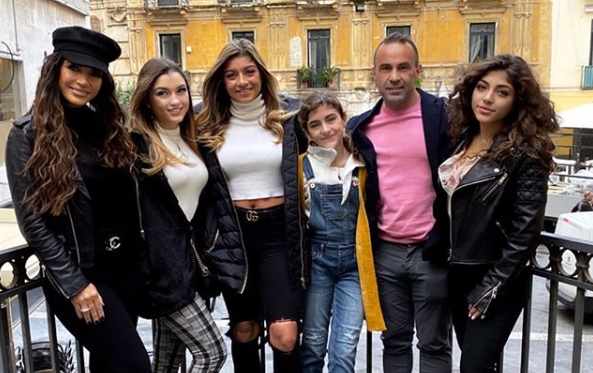 Joe Giudice is doing his best to remain optimistic while he waits for his final deportation ruling. On Saturday, the Real Housewives of New Jersey husband shared a heartfelt post on his Instagram. He talked about life and the need to let go of the past. His wife, Teresa Giudice, responded to the post in agreeance with him. She commented, “Very True,” with a heart-eye emoji.

Joe posted this just a few days after an emotional episode of RHONJ aired on Bravo. The episode was shot back in April when Teresa had learned that Joe’s second appeal had been denied.

“I am shell-shocked,” she said. “I’m so drained. It seems like one bad thing after another. I feel like I’m just so numb. I feel like I can’t even believe this is happening.”

The family’s lawyer, James J. Leonard Jr. explained the next steps for Joe to Teresa and her brother Joe Gorga. Unfortunately, Leonard didn’t have any good news to share.

“He’s in trouble,” Leonard said. “We have to start the whole process all over again. But the problem is, this is his last chance. And you’re not bringing forward new information, so I think the odds are against Joe at this stage. Immigration is the hottest topic on the planet and I think Joe is caught in the crossfire of that.”

The case stems from October 2018 and a ruling had been made that Joe would have to leave the country. This would come after he finished serving his 41-month prison sentence for mail, wire, and bankruptcy fraud.

Born in Italy, Joe lived there for a year, after which his parents moved them to America. According to Yahoo!, he never obtained American citizenship. U.S. law states that immigrants can be deported if they are convicted of “a crime of moral turpitude” or an “aggravated felony.”

In March, Joe was released from prison and transferred into the custody of U.S. Immigration and Customs Enforcement to wait on his appeal decisions.

“We are extremely disappointed that the Board of Immigration Appeals has denied Mr. Giudice’s appeal.” Leonard said in a statement back in April. “We have filed a stay with the Third Circuit Court of Appeals and will continue to fight to keep Mr. Giudice in the United States, the only country he knows, and reunite him with his wife and four daughters.”

In October, Joe moved back to Italy, to Salerno to find work while waiting for the court’s decision. Teresa visited him in November with their daughters.

Teresa Giudice has remained realistic about the fate of their marriage, throughout their trying times. She admitted on the RHONJ season 9 reunion she’s “not doing a long-distance relationship.”

After she returned from Italy, Teresa said she hadn’t made a decision whether they would stay together or not.

“We’re just going to take day by day and see what happens,” she said. “I mean, I can’t predict the future, but as of now, it was two and a half days. It was too short to decide. But our daughters are the most important thing. We’ll see what happens. He lives in Italy, I live in America. I don’t know if that’s going to work.”

“I cried a lot,” she added, about the trip. “Just seeing my daughters with him and I was just very, very emotional. At the end of the day, I just want Joe to be happy. I’m just happy that he was free.”

‘Below Deck Sailing Yacht’: Alli Gets Emotional During Season 2 Reunion
Loren Brovarnik Gets ’90 Day Fiance’ Fans Raving About Her Style
Wait, Why Isn’t A New Episode Of ‘Seeking Sister Wife’ On?!
‘Autopsy: The Last Hours Of Sonny Bono’: Release Date, How To Watch
Are Joe & Kendra Duggar At Odds With Jim Bob Because of Josh?