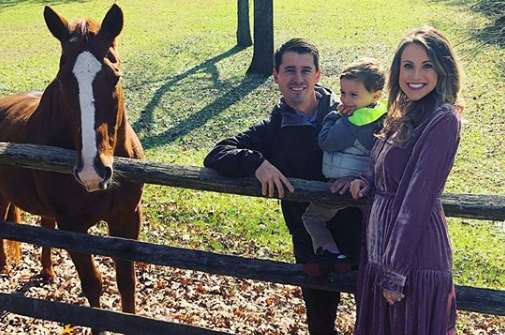 This family of three is becoming a family of four! Ashley Salter, former Bachelor contestant is expecting a second child with her college sweetheart, Austin Brannen. And the expecting mother has been showing off her cute baby bump.

Back In The Bahamas, Ashley And Her Family Are In Paradise

In a family photo from the Bahamas, the couple posed with their 2-year-old son, Brooks, on Sunday, December 8th. The happy picture showed Brannen holding Brooks with Salter by their side holding her baby bump. A simple caption reads, “Paradise with my loves.”

Fellow Bachelor Nation star Annaliese Puccini shared some love in the comments, sharing “Congratulations” with three beating heart emojis. Puccini competed on Season 22 of The Bachelor as well as seasons 5 and 6 of Bachelor in Paradise.

According to UsWeekly, Salter showing off her pregnant belly isn’t new to her fans. Back in September, she announced that she and Brannen were expecting a baby. She took to Instagram to post a photo with the captioned, “We are over the moon about our Baby GIRL, arriving in March.”

Paradise with my loves @agbrannen

Reunited And It Felt So Good!

Brannen and Ashley welcomed Brooks to the world in April 2016. Just two months after it was revealed they were expecting, Salter made an Instagram post of her newborn son. She captioned it, “Long stormy night brings a beautiful angel this morning. Brooks Hartman Brannen 7lbs 2oz 4/7/16. ” Just five months later, the couple took to the Bahamas to tie the knot. Leading up to the big day, Salter expressed her excitement with a Bachelor-inspired Instagram post. The photo was a black-and-white shot of her on the beach in a bikini captioned, “My last day as a single woman #saltertothealter #brannengotthefinalrose.” She found her own bachelor to take the rose and she couldn’t have been happier about it.

The reality star and commercial real estate broker first began their journey together while they attended Auburn University. The pair reunited after she returned to Georgia after she filmed season 2 of Bachelor in Paradise. Their love had been rekindled and the couple got engaged in September 2015.

On season 19 of The Bachelor Ashley Salter competed for Chris Soules‘ love. She stood out from the other contestants with her occasional comments that would baffle those watching. She made comments about pomegranates that look like onions and a location for a group-date that reminded her of “Mesa Verde.” But she ended up being let go in week 4 but on Bachelor in Paradise did have dates with both Nick Peterson and Dan Cox.

What do you think of the baby bump photo? Leave a comment below!