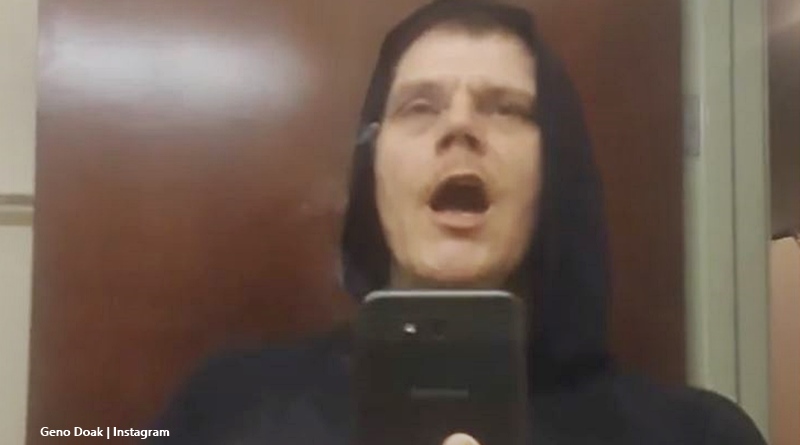 Mama June: From Not To Hot fans really don’t hold with Geno Doak these days. And, neither does June Shannon’s daughter Honey Boo Boo. Seemingly addicted to the rough character, fans think June can’t see how he’s destroying her life. The foul-mouthed character suddenly popped up on Instagram and in a bizarre anti-cancer promo he happily puffed on a ‘cancer stick.’

Mama June: From Not To Hot – Geno Doak surfaces on IG with anti-cancer promo

Fans of the WEtv show mercifully seldom hear from Geno these days. He last appeared on Instagram about four months ago. TV Shows Ace reported that he and June sold off her home and hit the road in an RV. Some fans suspected June might try avoiding their possession of drug paraphernalia charges. But, we subsequently saw them at court where they faced federal charges. Geno, in his usual uncouth fashion, cussed reporters and made rude signs at them.

Some fans hope that June gets sentenced to jail as they fear that’s the only way to separate them. After all, June won’t even give up Geno for her daughter Alana (Honey Boo Boo) who lives with her sister Pumpkin. While the family still hopes for some kind of intervention, June resolutely refuses any help. We reported in September, that Geno’s apparently “preventing her from getting help for her addiction issues.” After staying quiet for a long time, the most unpopular character in Mama June: From Not To Hot suddenly shared a rather bizarre anti-cancer promo.

The Ashleys Reality Roundup came across the very non-illuminating video on Instagram. They noted that it was in aid of the “No Shave November.” Across the world, it’s become known as “Movember” month. Men abstain from shaving in an effort to raise awareness about cancer and men’s suicide. Now, many celebrities support the very good cause. But, probably, the Mama June: From Not To Hot character might be the first one who ever did it while smoking a ‘cancer stick.’ The outlet reminds readers that cigarettes are commonly termed “cancer sticks,” as they are known to cause cancer.

In the video, where Geno manages to look like a wanna-be stickup man in a hoodie, he says, “Hey y’all, it’s me.” Then he says he hopes that fans “remember” him. As if they could forget. Meanwhile, he’s puffing on a cigarette. Basically, peppering his video with bad language, he’s not gonna shave and we must all do what we can for cancer awareness. Unimpressed Mama June: From Not To Hot fans thought it rather bizarre and had plenty to say to him.

One fan said, “Call me stupid but doesn’t smoking cause cancer?” To which, Geno replied, “Yes it does, stupid.” Another said, “yes it’s weird to wanna fight cancer while advertising it.” Others chimed in and some got quite hard-hitting. One critic noted, “Hows mama june thats the real question…and u talking about cancer while smoking f*cking moron smfh…”

What did you think about the rather bizarre appearance of Geno Doak smoking a ‘cancer stick’ while promoting for an anti-cancer campaign? Sound off your thoughts in the comments below.

Remember to check back with TV Shows Ace often for more news about the cast of Mama June: From Not To Hot.