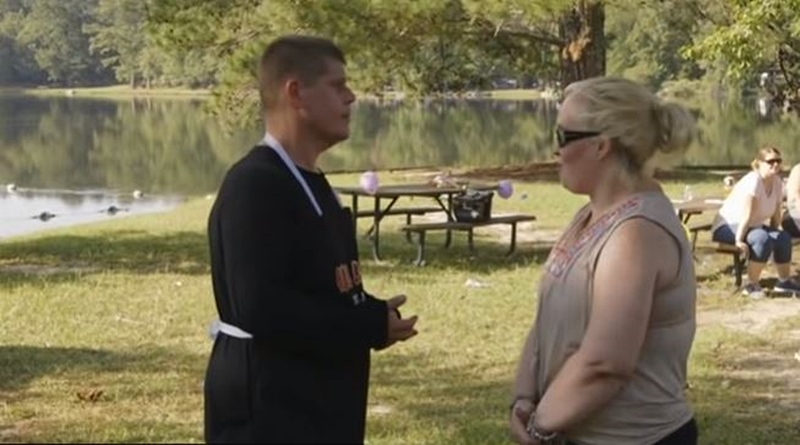 Mama June Shannon recently faced complaints from the Home Owner’s Association about her home in Georgia. Now, it looks like she’s left it and plans to live on the road with Geno Doak, her boyfriend. TMZ communicated with a source who says June’s not living in her home in Hampton. Apparently, she’s planning for life wherever the road takes her.

Mama June flips off suburban life, hits the road in an RV

With daughter Alana out the house and living with Pumpkin, June sold most of her belongings. The sale announced on Facebook Marketplace revealed that even the bed was sold. Back then, speculation arose that she and Geno needed the cash because of their lifestyle. Rumors from sources indicated that June and Geno spent a lot of money on drugs and casinos. In fact, speculation also arose that’s the reason attorneys took steps to safeguard Alana’s money.

The complaints from neighbors came after a broken window on June’s house just got boarded up. Plus, a big dumpster sits in the front yard. Neighbors allegedly complained it made their suburb look “trashy.” Now, it seems the big sale of personal belongings came along wth them tossing the trash out. The dumpster sits seemingly unattended. In fact, a TMZ source says Mama June’s already left the house in their RV.

TMZ heard that June put the home on the market. However, that’s not verified at this time. Plus, they noted that Alana and Pumpkin allegedly discussed the radical move with June, but not in person. Apparently, all communications came via phone calls Certainly, some neighbors suggest that’s the case. Meanwhile, a report from E!News suggests the two daughters have “officially cut off” their ties with Mama June.  TV Shows Ace reported some time ago, that Alana opted to live with Pumpkin in reference to the dysfunctional atmosphere in June’s home.

Other reports suggested that Alana would have moved back in with her mom, but June refused to part with Geno. We reported back in June, “Mama June has no intention of leaving Geno. The two have been through a lot together and their relationship… seemed to survive the drama. Honey Boo Boo doesn’t seem to mind living with her sister for now. Based on Mama June’s behavior, Honey Boo Boo may want to get used to living with Pumpkin instead of her mother.”

Speculation June runs from the law

Of course, if you sell all your things, pretty much live out of casinos and cohabit with a person who admits to taking drugs, it raises other speculation. After all, selling your home and hitting the road seems drastic. So, why did Mama June sell everything and book out of town? Patheos speculates on court documents obtained by WOACB. Their take on it is that June could try and evade her “charges for drug possession in Alabama. Geno Doak has multiple charges related to drugs and domestic violence from an arrest in spring 2019.”

According to the outlet, “in August records indicate that the court mailed June a notice that her attorney has been removed from the case. Court records do not show the next date for her hearing, but she is listed in “delinquent” status. Additionally, a warrant was mailed for her arrest.” This all sounds like a disaster waiting to happen. All we can do is hope that things are not as bad they seem on the surface. In the meantime, fans just hope Alana stays with her sister Pumpkin as long as possible.

What do you think about the rumors that June’s leaving town and hitting the road in an RV? Do you think this really sounds like a bad idea? Is it possible she hopes to evade her drug charges? Sound off your thoughts in the comments below.

Remember to check back with TV SHows Ace often for more news about Mama June.