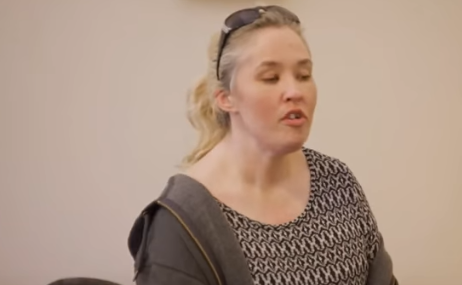 Though Mama June seems to be done with her family, they have yet to give up on her. The family is looking for a Hail Mary. They just want to sit down with her for a few minutes to talk.

TMZ reported that June’s sister, Joanne, found a way to get June away from Geno Doak, her boyfriend. They say the next step is to get June some professional help for her addiction issues. Until Geno is out of the picture, they know it’s futile.

Back in March of this year, June was arrested for drug possession at a gas station. This was following a domestic altercation with Geno, according to DailyMail.

On Wednesday, June and Geno were in court in Alabama when Geno lashed out and was shouting slurs at photographers. In a video from TMZ, Geno hugs Joanne in the parking lot as she follows the couple to their car.  Joanne is begging June to get some lunch with her and talk, June in return slams the car door in Joanne’s face.

Alana refuses to come home until Geno is gone

Joanne went to the courthouse earlier this month, hoping to see June but she didn’t show up. It’s been said that Joanne has also tried contacting her over the phone, continuously, but no avail.

Earlier this year, Mama June’s daughters and Joanne staged an intervention, but she refused. Honey Boo Boo and her sister Lauryn, want nothing to do with June unless and until she dumps Geno once and for all. Alana broke down and cried during the intervention. Right now, she lives with her sister Pumpkin, but she wants to move back home.

According to AOL, June and Geno are said to be living in an RV after Mame June unloaded her home. Sources claim the home was sold to buy the RV so her and Doak could travel the country. Witnesses who toured the home this summer said the bedroom floor had been littered with “what looked like needles or syringes.” Back in August, June began selling some of their household items on Facebook, including some of Alana’s belongings.