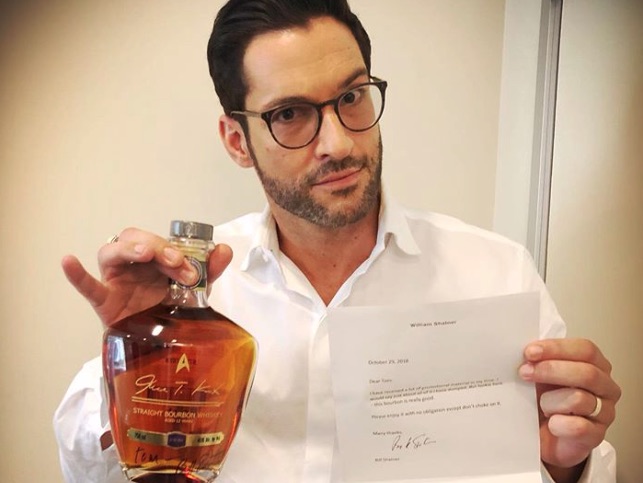 On Friday, Tom Ellis wanted to talk about Lucifer. Tom is not headed to the multiverse anytime soon. Turns out, instead of working in Vancouver the other weekend, he was actually hanging with a friend who was celebrating a birthday. How did Tom’s fun weekend get mistaken for a DC crossover cameo?

Tom Ellis Is Not Doing A DC Crossover Cameo

Lucifans who were concerned that Tom Ellis has already moved on from his role as Lucifer can breathe easy. The actor’s Vancouver weekend off was mistaken for something else. Word on the street is that Ellis was going to cameo in the highly anticipated DC crossover, Crisis On Infinite Earths. How did this rumor even get started?

It sounds like a lot of this was a combination of onlooking spotting Tom Ellis in Vancouver. Looks like they went to social media and soon, the rumor started to spread.

On October 12, @outlaw_hobbies posted on Instagram: “That’s a wrap on the #DC crossover for #Lucifer star #TomEllis. He’s been in town the last couple days filming the #crisisoninfiniteearths #Flash episode but had to head back to #LA today #DCTV #arrowverse #yvrshoots #yvr#vancouver @whatsfilming. In the photos, Tom Ellis was wearing street clothes, autographing Lucifer memorabilia.

On October 12, this time on Twitter, @canadagraphs posted “There was a scene with at least 4 actors tonight at the set. David Ramsey, Katherine McNamara and Matt Ryan…. no surprises there. They did a scene with Tom Ellis dressed like Lucifer Morningstar. Yes, you read that correct. #CrisisOnInfiniteEarths.”

There was no photo or other information backing up this claim. Who is this tweeter? @canadagraphs’ bio states; “Uncensored opinionated ranter sometimes. Autograph Hound. Vancouver Filming spoilers poster. Sometimes post film locations to @whatsfilming and #YVRshoots tag.” This doesn’t sound like they are working behind-the-scenes anywhere. Who did they see if it was not Tom Ellis, or was this a guess?

People in Vancouver must look for what is filming and posting it to social media. For those not in the know, Vancouver is a top spot for filming television shows and movies. It just happens to be where a friend of Tom’s was celebrating a birthday. However, Tom didn’t mention who was celebrating their birthday, but that very person could be in the industry and filming up there.

That’s a wrap on the #DC crossover for #Lucifer star #TomEllis. He’s been in town the last couple days filming the #crisisoninfiniteearths #Flash episode but had to head back to #LA today #DCTV #arrowverse #yvrshoots #yvr #vancouver @whatsfilming

As of now, Tom Ellis is busy filming Lucifer. They were just recently filming the fourth episode, entitled “It Never Ends Well For The Chicken.” We already know that Tricia Helfer may be guesting on this particular episode. Lucifer fans around the world are expecting 16 incredible episodes. In addition, the cast and crew are totally focused on Lucifer. Before they began filming Season 5, Lucifer show runner Ildy Modrovich promised that this was a “labor of love.”

Since the announcement that Season 5 would be the final season, Ellis has been mostly quiet on social media. Before they started pre-production, Tom shared a #tbt selfie on Instagram, taken before he shot the Lucifer pilot. What he wrote was very reflective and emotional. He thanked Lucifans around the world. Most of all she shared how he “loves” playing this role and from the time he read the part, he knew this was for him.

Tom Ellis is clearly not thinking about his own acting future. His focus is the show. He has time to cameo in other projects, or even fulfill his dream of playing James Bond. In conclusion, he is Lucifer Morningstar. That is to say, he clearly intends on relishing every last moment of this role.

something completely different for once.. 😄my favorite TV show, nearly the only thing i watch, is @lucifernetflix 😄 i met the angel @dbwofficial and the devil @officialtomellis last January at the #lucifercon #lux in #brighton 😄 i just love this picture taken by the @starfuryevents photographer 😄😍 i have never been to such an event, but it was really worth it 😃 #lucifer #lucifermorningstar #lucifernetflix #starfuryevents #besttvshow #mustwatch #tomellis #dbwoodside

Lucifans what do you think of Tom Ellis’ statement on the Crisis On Infinite Earths rumor? Share you comments. Be sure to check back with TV Shows Ace for all the latest in Lucifer news. Lucifer Season 5 filming now. The final season should drop on Netflix sometime in 2020.