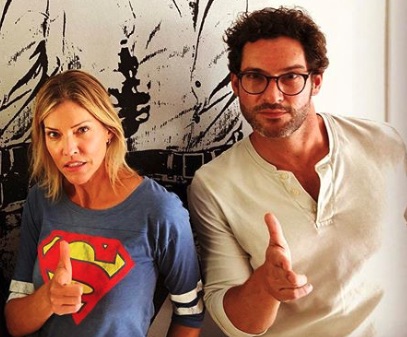 On Wednesday, Tricia Helfer announced that she is returning to Lucifer for Season 5! What do we know about her return to Lucifer? Who will she play and how many episodes will she appear on Season 5?

Uh oh…guess who’s back to @lucifernetflix ?? @tvline gives the scoop on “who’s” coming to play for a bit 😉😈

Tricia Helfer Is Back On Lucifer!

“Uh oh”! Tricia Helfer is returning to Lucifer! The Battlestar Galactica star is back, but she doesn’t appear to be returning to earth as sexy mom, or reformed attorney Charlotte Richards. TV Line shared a first look and she is totally de-Cyloned. Instead of looking like a sexy supermodel, she has a sort of Mrs. Cleaver, 50s sort of vibe going. Tricia Helfer is wearing a rather conservative shirtdress, complete with pearl necklace and earrings. Her hair is shorter, tightly curled and slicked back, as if she was on a PTA board.

The first hint that she may return was on October 12, when the Canadian actress tweeted, “Had such fun on set today. Can’t say for what…yet…but lovely to play and be around wonderful people.” Who is “wonderful people”? Well if you are a Lucifan, you know it is the cast and crew of this talented Netflix series! Fans asked if she was returned, but it was not for a few days before it was confirmed that she will be back!

What do the Lucifer writers plan to do with Helfer’s character, who is back for essentially a third role?

Had such fun on set today. Can't say for what…yet…but lovely to play and be around wonderful people.

Lucifans would love to see Charlotte reunite with Detective Douche, Dan Espinoza. Dan found love with Charlotte Richards, settling into a cozy relationship. He became less of a douche, warmer, hanging with her family, making waffles, and being uncharacteristically happy. Then she was murdered, breaking his heart.

But in Lucifer Season 4, Detective Dan was bitter and blamed Lucifer for Charlotte’s death and his unhappiness. He seemed to go down a steep decline. Could the return of Charlotte be the beginning of redemption for Espinoza? Because Lucifer, is, if anything, a show about redemption.

Right now, it is clear that Tricia Helfer has been a guest star on the show. On Tuesday, she tweeted she is off to film a Hallmark movie. So, Tricia Helfer fans will have to be satisfied with a small dose of her effervescent personality. We also know that the showrunners Joe Henderson and Ildy Modrovich will not bring her, or anyone else on, unless it was to move the story forward.

Back in 2018, Henderson had told the Word Balloon podcast that they only brought in Tricia Helfer for Season 3 because they had a meaty role for her to play. They were not going to insult her with an underwhelming storyline. Fans should expect the very same thing for her guest appearance in Season 5.

Although Tricia Helfer only appeared in two seasons of the show, Lucifans consider her a member of the regular cast. The Charlotte Richards storyline of redemption is one of the most memorable of the series. The image of Amenadiel holding the dead Charlotte Richards and going up to heaven is iconic to the show. Helfer’s talented acting and comedic chops has been one of the reasons this show has been so fantastic.

Lucifer Season 5 Promises One Surprise After Another

Although they are not even a third of the way into filming the final season of Lucifer, it does appear that Season 5 will be a spectacular send off. Ildy Modrovich has promised that Lucifer Season 5 will be a “love letter to fans.” There may (hopefully) be a musical episode. There will (hopefully) be a happily ever after for Lucifer and Chloe. And there will (definitely) be a lot of fans who will savor every last second of this remarkable series in the final season.

Lucifans, are you excited Tricia Helfer is returning in Lucifer Season 5? Share your feelings in the comments field. Be sure to check back with TV Shows Ace for the latest Lucifer news. Netflix will drop the final season of Lucifer sometime in 2020.