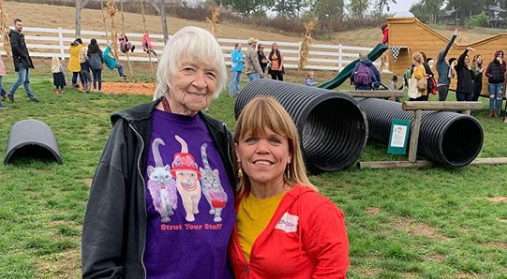 In the family pumpkin patch business, it seems Amy Roloff has been pushed to the side. Caryn Chandler, Matt’s girlfriend, has been front and center.

Instagram Revealed A Bit Of Drama Between The Exes

This weekend, the Little People, Big World exes took to social media to reveal the contrast of their lives during the Halloween season. On Saturday, October 19th, Amy posted a picture of herself with an older fan at Roloff Farms. “Even though I wasn’t really a part of Pumpkin season this year (various reasons), I truly missed meeting so many of you and dressing up. Enjoy this amazing time of year—Fall.” She captioned the photo.

It seems the recent death of Amy’s mother Patricia could have played a part in her absence. Just earlier this week, while still in mourning, Amy spoke out to her fans online. “My Mom passed on Sept 24th. I’m going back home, to Michigan, to say good-bye and be with my Dad and my family… the memories I have of her will be with me for a lifetime.” In response, followers gave their condolences.

Meanwhile, Matt also made an Instagram post on Saturday. It was a photo of him and Caryn cuddled up together, smiling in front of the family farm.

Look who came out and helped at the pumpkin patch today. @rolofffarms @carynchandler1 We over heard one little boy tell his mom on the way out “mom. That was the best day of my life”. Now that made us smile! #funfun #lovelove

Matt warmly captioned the photo, “Look who came out and helped at the pumpkin patch today. We overheard one little boy tell his mom on the way out, ‘Mom. That was the best day of my life.’ Now that made us smile! #funfun #lovelove.” Matt revealed a shocking auction of his family items in Phoenix, Arizona caused him and Caryn to leave the farm rather quickly.

Matt told fans about the selling of parts of his famous family’s history, “Tons of random things for sale.” The auction move was a result of the war with his ex-wife Amy over the property. According to RadarOnline, Amy recently sold part of the iconic farm to Matt for $667,000.

Matt has been clearing the farm with the help of Caryn who has been by his side the entire time. At the end of the day on September 14th, Matt posted a photo on Instagram, of him and Caryn facing the cameras. “Today we conducted the very fun auction all morning while also filming for LPBW the entire time.” He continued, revealing it was time for the couple to leave the farm again to go to his Arizona vacation home with his girl.

“As soon as the auction (and filming wrapped today) Caryn and I bolted to the airport to catch the late flight from Portland to Phoenix—now we are all cozy in our Arizona home. Sitting on the back terrace enjoying the warmth…Deciding which pool to visit tomorrow for some long overdue noodle time.” Now the couple is back in Oregon to give Haloween fans their all.

Just a week before the sad news of Amy losing her mother, she got engaged to her longtime partner, Chris Marek. Chris asked Amy to be his wife on September 18th. “I’m excited, I’m so surprised, I’m thrilled!” she said excitedly. “I never in a million years thought I’d be getting married again, but I also hoped for it!”

Andy Cohen Dismisses Victims On Erika Jayne Documentary
Jeremy Vuolo Brags About Jinger Duggar’s Latest Achievement!
Did You Miss This JonBenet Ramsey Reference In ‘Cruel Summer’?
Lauryn ‘Pumpkin’ Shannon’s Baby Boy’s Name: When Will Fans Meet Him?
‘You, Me & My Ex’ Coming To TLC: Here’s What We Know So Far