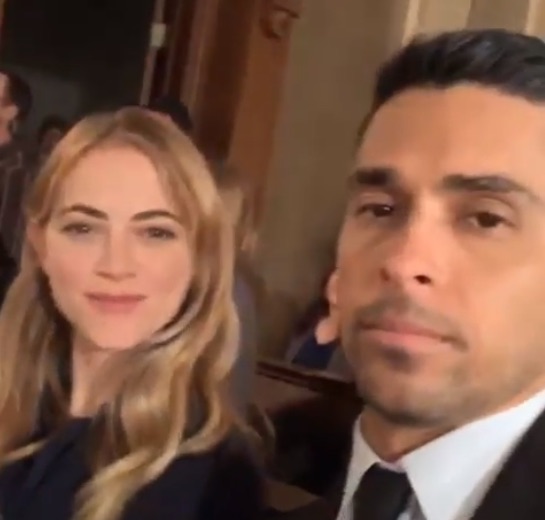 Earlier this week, the NCIS showrunners Steven D. Binder and Frank Cardea spoke about the Season 17 storylines. After some extensive Ziva David discussion, they shared a bit about the progression of the Torres-Bishop romance. What did they reveal?

Besides the exciting return of Cote de Pablo on September 24, there are NCIS fans wondering whether Ellie Bishop (Emily Wickersham) and Nick Torres (Wilmer Valderrama) will get closer to a romance. Speaking to CarterMatt, the showrunners confirmed that something is brewing between the two. They were both asked about the conversation between Torres and Kasie  (Diona Reasonover), and the knowledge that there was a spark between the two agents. Does this mean there will be a flame in Season 17?

Not quite yet. But, as Binder explained, “We’re not rushing it, but we’re thinking about it all the time.” Next, speaking as if he has put a lot of thought into this relationship, Binder shared  that “The road isn’t always linear.” Sounds like there will not be a cupid’s arrow shot straight in the hearts of Bishop and Torres.

Subsequently, Steven D. Binder asked the question that fans are wondering, “Will they or won’t they? is the binary question when you ask about this stuff — we’re seeing where the road is taking them.” The two pointed out that with a season of 24 episodes, they generally divide plot lines into three even parts. This first part is all about Ziva. Could the next part be a progression with the Bishop-Torres romance? Maybe just a hint of a romance.

Showrunner Frank Cardea shared that “It’s a relationship that we’ll continue to explore and evolve.” He promised that there will be some “funny moments,” as well as “some awkward moments,” and “some heartfelt moments.”

Hints Of Bishop-Torres Romance Since Season 15

There have been hints of a slow burning romance, between Bishop-Torres, since Season 15. In the episode “High Tide,” the pair went undercover as Luis and Charlie. Torres, the undercover expert seemed impressed with Bishop’s ability to get into character. She pushed herself as an agent, facing a very dangerous situation. The relationship between the two completely changed after this undercover stint.

The addition of Ziva David to the mix could only mean that Ellie will become more of a formidable match to Nick’s storied past as an agent. Before discovering that Ziva was alive, Ellie had expressed that she wished she learned from Ziva. Her wish may come true. This experience of working with Ziva could open up Ellie in the same way as when she portrayed Charlie.

Then again, in the first episode of Season 17, Ellie will have to tell the rest of the team Ziva is alive. This bit of knowledge may get agents to adversely react to her, the messenger and the secret keeper. This is an opportunity for Ellie to show others that she is not a junior agent anymore.

She knew Ziva was alive, but made a promise. She didn’t share this secret with anyone else. Ellie seemed to be more empowered after the episode “She,” and this sort of personal power may also give her the confidence to dive into a  romance with Torres. Sounds like the NCIS writers have a plan. The season starts soon and it sounds like it will be great!

NCIS fans, are you getting excited for the Season 17 premiere? Do you want to see a Bishop and Torres romance? Be sure to check back with TV Shows Ace for the latest on NCIS. NCIS Season 17, featuring the return of Cote de Pablo as Ziva David, premieres on September 24 on CBS.