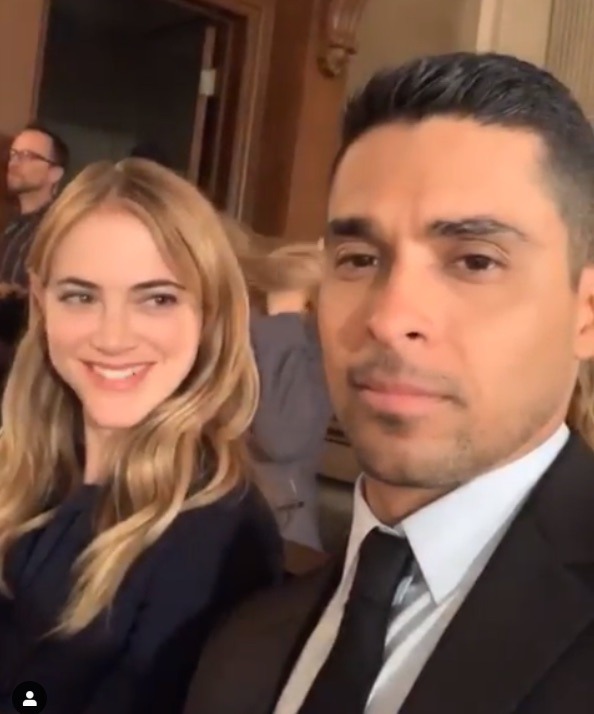 NCIS fans who waited through Season 16 to really see Bishop (Emily Wickersham) and Torres (Wilmer Valderrama) have a real romance are now wondering if this will finally happen. For two seasons, the writers of the CBS show have been throwing some hefty breadcrumbs in the direction the two coworkers. Will Season 17 finally feature a real romance between Torres and Bishop?

Is There A Torres And Bishop Romance?

For the past two seasons, it appears that Torres and Bishop are heading towards a romance. In the Season 15 episode entitled “High Tide,” the two worked undercover as Luis and Charlie. As usual, Torres went rogue, which should not have surprised Bishop. In contrast, Bishop surprised Torres with her sultry take on her undercover character. This was so memorable that the two called each other by their undercover names in later episodes.

The writers continued to put the two together in Season 16 with some not so subtle hints.  In one episode, they were caretakers of a baby, which meant that they were playing house. In the last episode, “Daughters,” Kasie (Diona Reasonover) Kasie and Torres discuss Fornell’s (Joe Spano) rage towards the drug dealers that put his daughter into the hospital. Kasie quietly points out to a silent Torres that he would “feel the same” sort of rage if this happed to Bishop. The NCIS writers threw in that emotional breadcrumb to show that everyone knows how intensely passionate Nick’s feelings are for Ellie.

This relationship has been a slow burning romance. Eleanor “Ellie” Bishop started out the show as a former NSA geek. Since working with Torres, the low key agent has shown a lot of spark. She was the replacement for Ziva David (Cote de Pablo), but has always been very conservative in her approach to her work, opposite of super agent Ziva, the agent she replaced. But, it appears that this storyline may go full circle with the return of Ziva. Could this hurt the Torres/Bishop romance?

Could Ziva Come Between Torres And Bishop?

Season 17 promises to begin with the the Ziva David storyline. Right now, Bishop knows that Ziva is alive. Viewers know that Gibbs knows Ziva is alive–assuming he doesn’t believe she is a ghost, like Diane. How will the two be able to connect the dots and discover that they both know this life-changing secret? But there could be complications with this knowledge.

Ellie knows Ziva is alive, but could this secret ultimately hurt hurt any sort of romantic relationship with Torres? Ellie has always been the open one in this relationship. Could Nick mistakenly think that she is keeping something from him, as in suspecting that there is another guy?

All over social media, fans comment that there could never be a legitimate Bishop/Torres romance because Ellie is married. This is not an illicit romance. Eleanor Bishop is divorced.

When Ellie first joined the NCIS team, she was married to Jake Malloy. After she divorced the NSA agent, she dated Qasim Naasir. He even proposed to her. Sadly, he was killed, leaving Ellie heartbroken. The only guy that Bishop has flirted with since Nassir’s death is Nick Torres. As a single woman, she could do that, although it would be assumed that interwork relationships would be frowned upon in their particular line of work.

Wilmer Valderrama And Emily Wickersham Have Loads Of Chemistry

Clearly, Wilmer Valderrama and Emily Wickersham have chemistry. Because he has also done comedy, Valderrama has a looseness that brings a lot of charm to the show. This was something missing when Michael Weatherly left, and Wilmer brought the humor back to NCIS.

Clearly, Emily enjoys working with Wilmer. The nature of their relationship could be summed up in a recent social media post.

Calling Emily his “work wife” in an Instagram post, the former That 70’s Show star shared a photo of himself giving a peck on Emily’s cheek. This was when they were filming a courtroom scene from earlier this season. Her response to the peck on the cheek was a blushing “Wilmer!” He looked stoic, until he opened up into one of his gorgeous smiles.

Would you like to see Bishop and Torres have a steamy romance in NCIS Season 17? Share your comments below and make sure to check back with TV Shows Ace for the latest on NCIS. NCIS Season 17 returns on CBS in the fall.