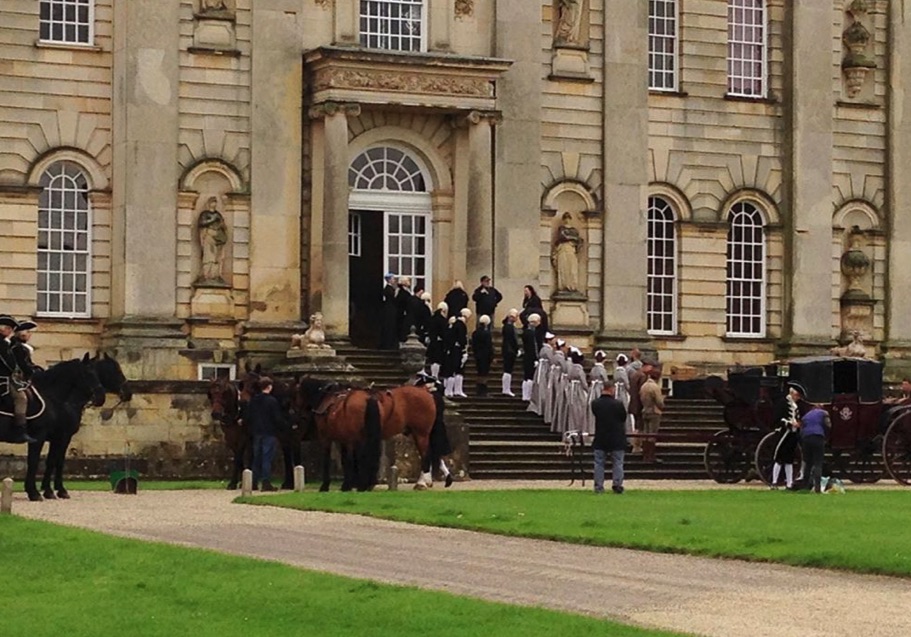 On Thursday, a local paper posted photos from the Bridgerton film sites in Bath that are giving us serious Jane Austen vibes. What do we know about the filming of the new Shondaland show on Netflix?

Local cameras in the Somerset area caught quite a site. In Bath, they photographed some of the cast of the new Netflix series Bridgerton. Somerset Live has posted many photos of the actors and extras, all gorgeous in their Regency attire and hair. Subsequently, some of the locations where Bridgerton is being filmed includes Sydney Gardens and the Holbourne Museum. The design of Sydney Gardens was originally laid out in the 1790s. Moreover, this is historically prefect for the Regency-era Bridgerton series. Even Jane Austen spent time at events at Sydney Gardens. The adjacent Holbourne Museum was originally the Sydney Hotel, where Jane spent some time as well. Of course, Bath is well known to Jane Austen fans. Most of Persuasion takes place in Bath and Jane herself lived there for a lengthy time.

Bridgerton is based on the bestselling Julia Quinn series of the same name. The first season of this Regency period romance will be based on the novel The Duke And I, featuring the story of Daphne Bridgerton and Simon Basset, Duke of Hastings, portrayed by Phoebe Dyvenor and Regé-Jean Page. Julie Andrews has also been cast as the voice of Lady Whistledown, the paper’s gossip. Netflix will be dropping eight one-hour episodes, some time in 2020.

The Royal Crescent in Bath has been transformed into a set for the filming of Bridgerton, based on the novels on Julia Quinn. #bridgerton #bridgertonseries #juliaquinn #juliaquinnbooks #royalcrescent #movieset

In one of the Somerset Live photos, there  appears to be a photo of Claudia Jessie and Luke Newton, who are playing Bridgerton siblings Eloise and Colin. Luke has the full Regency sideburns going on, wearing brocade and a crisp cravat. Claudia has her hair done up beautifully. Although she has a white muslin sheet over her gown, you can see some delicate lavender toile at her neck and sheer white gloves.

Who designed these absolutely gorgeous creations for Bridgerton? Ellen Mirojnick. Most importantly, she has shared her inspiration board for the extraordinary costumes for this Shondaland production. Moreover, the quality of these designs show just how opulent this Netflix series will be.

Ellen Mirojnick, the Bridgerton costume director, posted her idea board on Instagram. Isn't it gorgeous?

Last week, Swedish Instagrammer Stephanie Jardeback posted some photos of Castle Howard and asked “Mid filming -curious to know what!” She posted multiple carriages, livery and a larger array of servants than any Downton Abbey episode! Of course, Bridgerton fans are assuming this is Hastings, Simon’s crib.

Consequently, a day later, Stephanie posted a short film on Instagram. However, in her next Bridgerton post, she clearly discovered that the filming she was witnessing north of York, England was for the new Netflix series. After that, she posted, “To fans of this new upcoming Bridgerton series, some of the filming crew riding towards a shoot at the castle yesterday- Erin saw the horses, I was just amazed by the men dressed up🤷🏻‍♀️” Even from far away, it is clear that this is quite a production!

Bridgerton fans, you excited to see the Shondaland series on Netflix? Share your comments and be sure to come back to TV Shows Ace for the latest on the Bridgertons. Of course, Netflix will drop Bridgerton sometime in 2020. Fans can add it to their queue now.