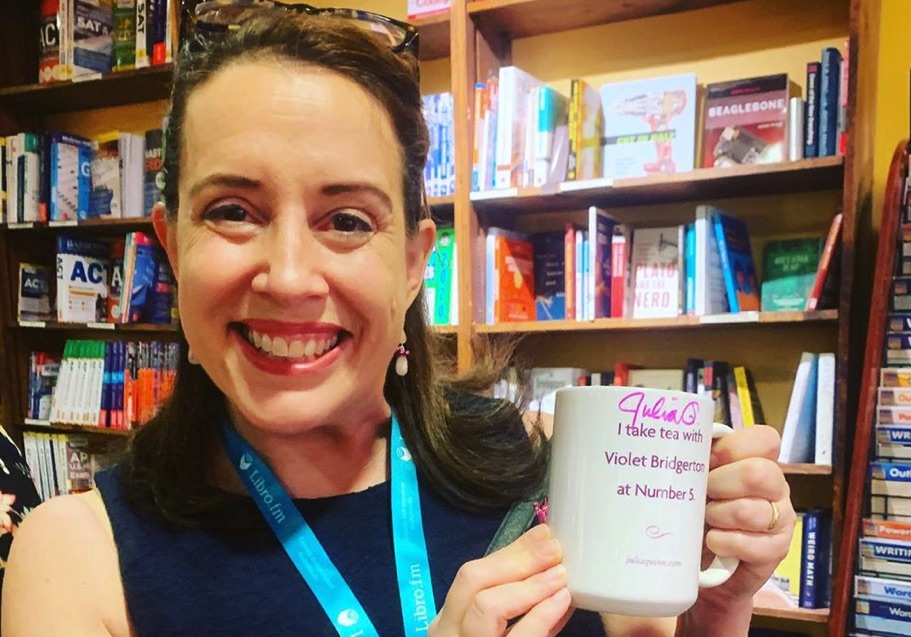 On Saturday, Bridgerton author Julia Quinn shared some news about the new Netflix series that is based on her Bridgerton book series. The best-selling author also shared her feelings about the Shondaland series. Does she approve?

Your BRIDGERTON questions answered. (Well, some of them, anyway.)Q: Will it be available outside the United States?A:…

What Does She Know About Bridgerton

Julia Quinn makes it clear to her worldwide readers that if they have Netflix, they will be able to see the series, “sometime in 2020.” The series began filming in July. There is very little information forthcoming on the time schedule.

Quinn is a consultant on the series. She assures fans that “everything I’ve seen so far, I have loved. LOVED LOVED LOVED.” That’s a lot of love–even from a romance writer!

She will be going to visit the set, presumably in England. Julia is “so excited I can’t even tell you.” This also means that she will meet the actors who are portraying the characters she dreamed up. Quinn joked that “I’m going to the set, so as long as they don’t flee in horror…”

The first book of the Bridgerton series was released in 2000. The Duke And I was the first in the series. This tells the romance of Simon Bassett and Daphne Bridgerton. These characters are portrayed by For the People star Regé-Jean Page and Younger’s Phoebe Dynevor. It can be safely assumed that the first episodes will be from this book as they have not cast other leads in the next two books.

Most of all, Julia Quinn is excited and emotional.

She even shared on social media a photo that the first scene was being filmed. “The showrunner posted this on Instagram, and now I’m trying not to sob happy messy tears the entire flight home from NYC.” Julia was leaving the RWA (Romance Writers of America) conference. This has to be one of the most exciting moments in her career.

Quinn’s real name is Julia Pottinger. To sum it up, she used a nom de plume because she was in med school and didn’t want anyone to feel uncomfortable. She didn’t want to seem unprofessional if a future patient read one of her books.

Early in her career, Julia gave up her plans to work in the medical field. Firstly, she sold her first novel, Splendid, at 24. Her romances have been incredibly successful, especially the Bridgerton series. They are very modern Jane Austen, taking place during the same Regency era. Moreover, Julia Quinn has a unique twist that makes her books so special.

The showrunner posted this on Instagram, and now I’m trying not to sob happy messy tears the entire flight home from NYC.

When the main cast was first announced, the New York Times bestselling author shared her feelings about the cast. Without putting words into this famous author’s mouth, let’s just say, there is a lot of love. Most of all, she wants fans to know that she loves the casting. Above all, she feels it is all spot on–and she didn’t even mention Julie Andrews’ name!

“There has been a lot of discussion about the recently announced cast of Bridgterton, and I know that a lot of you want to know what I think.”

“I am in utter love with every single casting choice. Like many of you, I wasn’t familiar with all of the actors, so when I got the news, I googled my fingertips off. I found photos, I found interviews, I found video clips. And all I can say is—the casting director is genius. Each of these actors will bring depth and magic to the characters in ways that have me shivering with anticipation.”

In particular, she discussed the casting of Regé-Jean Page, the actor portraying Simon Bassett. It appears that some fans have not been so excited about Page portraying the Duke of Hastings because he does not have blue eyes. Julia has something to say about that. This should easily quash any sort of objections anyone would have over Regé-Jean Page.

“I didn’t remember that his eyes were blue.”

“Regé-Jean Page is a brilliant actor, and if I’m allowed to objectify him for one brief moment, he is BEAUTIFUL, and I could stare at him all day. He is every piece of Simon that matters.”

“The same goes for Phoebe Dynevor, and Nicola Coughlan, and Adjoa Andoh, and every single actor who is bringing the Bridgertons to life. This series is going to be amazing, and I for one can’t wait.”

Screen-grab (3 of them) of my thoughts about the recently announced #Bridgerton casting news. I’m a TERRIBLE text-typer so I tend to post longer things on Facebook. Please do consider following me there, too. Facebook.com/AuthorJuliaQuinn

When Will Bridgerton Air?

What do you think of Julia Quinn’s excitement over the new series? Are you excited to see the Shondaland series on Netflix? Share your comments and be sure to come back to TV Shows Ace for the latest on the Bridgertons. Netflix will drop Bridgerton sometime in 2020.