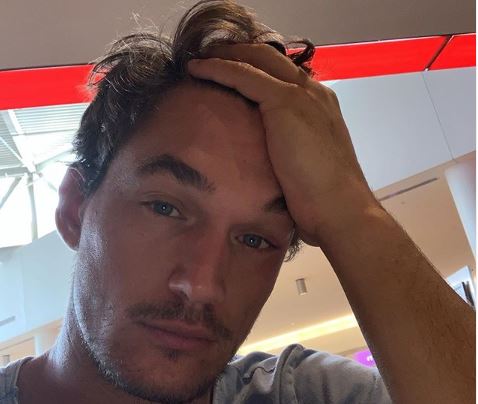 Hannah’s second choice Tyler C is showing the world he’s not still sitting moping around about being The Bachelorette‘s second choice. He’s basically eliminated himself from becoming the next Bachelor, but he’s enjoying calling the shots in his life, both personally and professionally.

He’s in demand with a ton of Instagram followers and should use this time to enjoy himself. Hopefully, his priorities and personality don’t shift as has happened to other contestants in the franchise including Dean and Blake Hortsmann.

Bachelor Nation hears less and less from Season 10’s Bachelorette Andi Dorfman. She was one of the girls hanging out with Amanda and their respective ex Josh Murray at Stagecoach. Now it’s been reported that Bachelor Nation stars Tyler and Andi worked up a sweat after leaving Andi’s apartment together!  (It seems like Tyler really likes giving people something to talk about as they could have met elsewhere.)

It looks like Tyler C. is running away from becoming the next #TheBachelor… literally.https://t.co/lLyVqZV4lt

But before everyone jumps to crazy, shocking, two or three-timing conclusions, relax Tyler and Andi are Bachelor Nation pals who are both training for the NYC Marathon on November 3. Tyler and Andi joined a group run with more than 200 fans through Central Park to support the ABC Food Tours charity.

Andi shared pics from the event on her Instagram Story, where she said everyone “crushed it”—and she thanked Tyler for inviting her.

Tyler is still hanging out with Gigi Hadid

The night before, Tyler was spotted out at Justin Theroux bar Le Turtle with Gigi Hadid and some friends including Gig’s bestie Cully Smoller. Hmmm, he’s already hanging with her clan.

Fans also spotted the two at a Starbucks in Lake George, New York, on Thursday, August 15. Wow, that’s a whole latte love traveling to upstate together. Page Six clarified that they weren’t alone and that “two or three girls” were with them. But according to another E! source allegedly, “They both like to hang out with a few of their friends to make it seem more casual, but Tyler always ends up staying the night alone at Gigi’s house.” For those keeping count, this is their fifth date…that we’re aware of.

A source told People, “Tyler lives in N.Y.C. now. He has his own place, but for their dates, they hang out at Gigi’s,” the source added. “He is very public about going in and out of her place — you can tell that he wants to be seen. He is enjoying the attention he gets for dating Gigi.”

Good news fans in the tri-state area, you can expect a lot more runs in Central Park as Tyler is apartment searching in the Big Apple.  Tyler is also training for the Chicago marathon in mid-October. Boy, this guy can run. If you think about the dates, these commitments put him out of the running for The Bachelor because they would drastically interfere with The Bachelor‘s rigid taping schedule to produce a show that must premiere in early January 2020.

The new season of The Bachelor typically starts filming in mid-September and continues for roughly two months, into November.