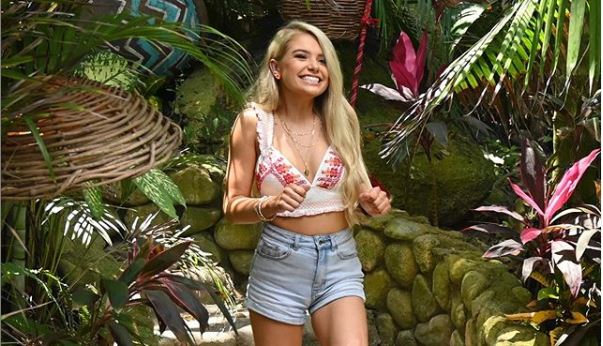 More than 17 years since its premiere, the Bachelor franchise continues to entertain, show and experience firsts within the reality dating show. Chris Harrison isn’t kidding when he boasts that Paradise is the best season.

Demi Burnett was a controversial contestant on Colton’s season of The Bachelor. She confessed to Colton that her mom was being released from federal prison after serving a sentence for embezzlement. She was constantly stirring up trouble. Demi, along with Katie Morton, were stationed undercover in a van at the mansion to spy on their bestie Hannah’s 30 contestants.

Demi is making Bachelor franchise history by being in an open same-sex relationship.  Her relationship has been used in promo teasers. In the premiere episode, she shared with Hannah B that prior to BIP, she was seeing a woman. They are not exclusive and that she came to Paradise to figure out what she wants.   Reality Steve did some investigating and has reported that Demi isn’t going to find love with another contestant. She is actually going to “bring” her girlfriend onto the show.

So is she really interested in Derek, or leading him on to receive his rose and remain in Mexico?

Chris Harrison told USA Today that Demi’s storyline on BIP “was a big deal for us…We took a lot of pride in how we were handling it, that we were going to embrace this.” In addition, Harrison added that he appreciates the bigger-picture conversations that emerge from the Bachelor franchise:

“I know it’s entertainment, I get it: I have a lot of fun with the show as well. But over the years, if you look back, we have pressed a lot of social issues, whether it’s slut-shaming, race, gender, double standards, you name it…. We don’t create these issues. We don’t drive them. But I think our show evolves with these social issues, and then it becomes a topic of conversation. If nothing else, that’s pretty cool.”

Demi has been praised by fellow franchise stars for “breaking Bachelor glass ceilings” with her sexual fluidity. After she came out as a “queer queen,” Nick Viall posted an Instagram photo of the pair, writing, “proud of you,” while Chris Randone tweeted, “There’s nothing more beautiful than supporting those who get judged because of their gender preference. Demi we love you.” A close friend and most-recent Bachelorette Hannah B is so proud of how Burnett, 24, has the confidence to be her true self.

“She’s so strong and brave to bring that narrative to the Bachelor franchise that really hasn’t been done before and just owning her truth…I’m really thankful that she felt like she could come to me as a friend and know that I’m going to support her happiness no matter what.”

Demi’s girlfriend Kristian Haggerty will arrive at BIP before the third rose ceremony. We’re two episodes in and we are still waiting for the guys to hand out the first batch of roses.

How do you feel about BIP exploring the first same-sex relationship? Don’t miss new episodes of Bachelor in Paradise Monday and Tuesdays on ABC.