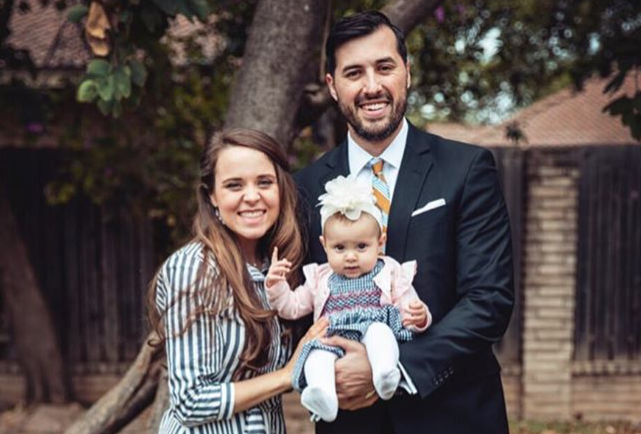 Counting On stars Jinger Duggar and Jeremy Vuolo recently moved from Laredo, Texas to Los Angeles, California. The couple and their one-year-old daughter Felicity made the move so that Jeremy could attend the Master’s Seminary. Here, he is studying in their graduate program.

The couple announced the move earlier this year, but they didn’t move in until July. Since the big move, Jeremy and Jinger have been showing off their new lives in Los Angeles. The Counting On crew filmed the move. Fans will be able to watch it when the show returns to TLC this fall.

When Jeremy and Jinger announced the move, they said, “As excited as we are to begin this new adventure, leaving Laredo this July will be one of the hardest things we’ve ever done; our friends here have become like family. Please pray for us as we open this new chapter of our lives.”

So far, they seem to be loving Los Angeles. They’ve been out exploring and trying new coffee shops. They attended a movie premiere. Even little Felicity is enjoying herself there. Just last week, Jana Duggar visited her sister, brother-in-law, and niece in Los Angeles.

The past year has flown by with our sweet Felicity! Being her mom is one of the greatest joys of my life. ☺️ And before we know it she will be running around, the opportunity to carry her in our arms having passed. So for now, we will gladly be her armchair chauffeurs 💕

The Counting On stars’ rent is revealed

Everyone knows that it’s not cheap to live out in California, especially in a big city like Los Angeles. On Tuesday, Radar Online shared a few pictures of Jinger and Jeremy’s new home. An insider also shared that the home has four bedrooms and two bathrooms. It’s valued at nearly $700,000 and is over 2,000 square feet. You can see the pictures here.

In a home sale listing, the rent is estimated to cost around $4,000 each month. This may seem very expensive, but you have to remember that the Vuolos are now living in Los Angeles.

Fans are beginning to wonder how Jinger and Jeremy can afford to pay such expensive rent. So, how are Jinger and Jeremy paying for this gorgeous home? They likely have enough money from starring on Counting On. With a new season right around the corner, more money will be coming in.

While Jeremy is attending school at the Master’s Seminary, he might be doing some jobs at the church. It’s not clear whether he is paid for any of his possible church positions or not.

Both Jeremy and Jinger joined Cameo, which is a service that allows people to buy shout-outs from celebrities, such as the Duggar family. This could be a way for them to bring in some extra money to contribute to the cost of rent.

What do you think of Jeremy and Jinger’s home? Do you have ideas about how they’re paying for it? Leave a comment below.

Counting On will return to TLC this fall.