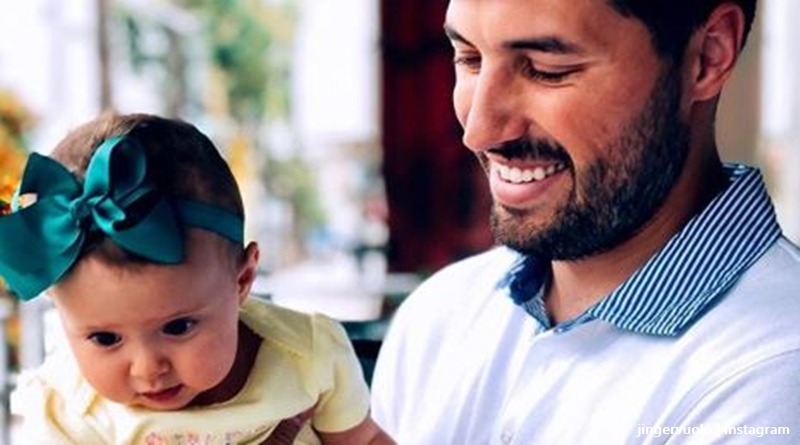 Counting On fans know that Jeremy and Jinger Vuolo set off for a new life in Los Angeles. Now, it looks like they arrived and start to settle into their new environment. They left Laredo, Texas so Jeremy could work at his post-grad studies via the Master’s Seminary in Sun Valley, San Fernando Valley. It looks like the family started exploring their new surroundings a bit.

Jinger and Jeremy never made any huge announcement about their arrival, but just quietly let fans know their whereabouts. Via Jeremy, we know they went to see the Duggars in Arkansas after Jim Bob Duggar’s mom passed away in May. Next, he shared a photo of them all on the road to California along what the film crew.

Counting On fans also got to see a fun video of their daughter Felicity being push around on a suitcase. That was captioned in the past tense, so it sounded like they already made it to Los Angeles. In the last two days, Jinger and Jeremy both posted photos of them eating out with Felicity. Plus, there’s a photo of Felicity sitting on the lawn covered with lovely fallen petals. That was captioned as “Summer in Cali.”

No official announcement on where they live in LA

There’s been no public information about where they actually live or plan to stay. However, as they go out and about, they often post a check-in to their Instagram. It seems the Vuolo’s may live somewhere near the Silver Triangle Studio City, as twice they checked into different eateries off Ventura Boulevard.

The first one by Jeremy let Counting On fans see them at the Pagliaccis Pizzeria. On the same day, Jinger shared a photo of Jeremy and Felicity at the nearby Art’s Deli. In Jinger’s photo, it showed Felicity trying to get down from Jeremy. She captioned it with, “She’s not a fan of sitting still these days.”  In Jeremy’s photo of them at the pizza place, Jinger’s holding Felicity who looks cute as usual.

Jinger looks particularly happy in California. Actually, it’s a bit harder to tell with Jeremy. As a pastor, he never looks unhappy, merely studious, or smiling the big smile. But Jinger looks amazing with her cap and Tee and possibly, we may have never seen her looking so radiant before.

Well, now we know the family’s in Los Angeles at last, are you looking forward to more photos of the Vuolo family? Jeremy said their journey was filmed so we’ll see all of that in another season of the TLC show.