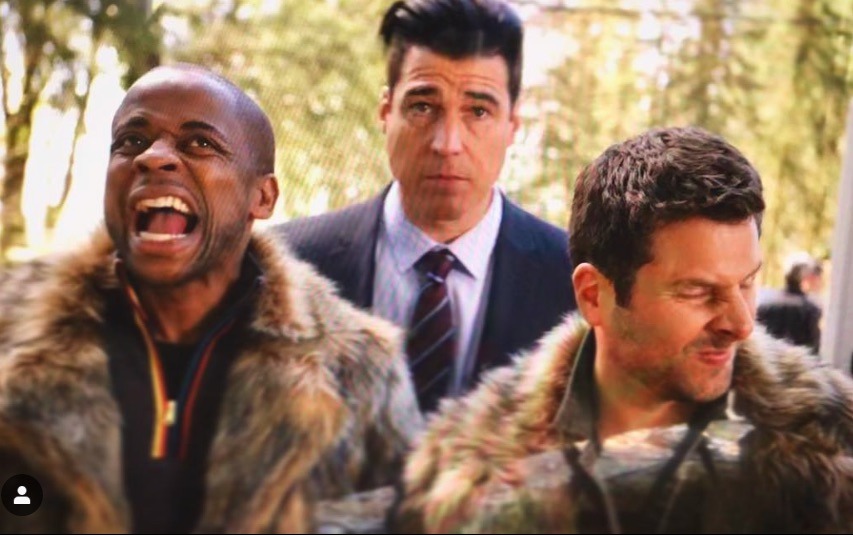 Psych-O’s are getting excited about the new Psych: The Movie 2. James Roday and Dulé Hill and even some potential costars have been revealing tidbits about the recently wrapped movie. It is promised to be a “vintage Psych-style Hitchcockian nod,” something that Psych has successfully played around with during their their eight regular seasons. What else has been revealed about the upcoming USA movie?

Psych-Os are getting excited about the latest Psych installment, Psych: The Movie 2. Although it will not air on USA until the holiday season, the cast has not been able to contain their enthusiasm for this new movie. Fans have already been assured that there will be a lot of Lassie (Timothy Omundson) this season. Omundson had a stroke right before the first movie began production, and was only on in a small cameo.

Psych: The Movie 1 took place in San Francisco. It ended on a cliffhanger when Jule’s spy brother Ewan (John Cena) barged into Psychphrancisco, trying to escape the bad guys. This was right after Shawn (James Roday) married Juliet (Maggie Lawson). Is this cliffhanger where Psych: The Movie 2 starts off?  No.

Dulé Hill told TV Guide that the movie takes place in Santa Barbara and in “real time.” “We continue in real time, so we see where Shawn and Gus and Jules and Lassie (Timothy Omundson) — where they are now.”  What doesn’t seem clear is that Hill added that “We see exactly what has happened over these past two years we haven’t seen them.” Does this mean that we get to see how they escaped the bad guys, with John Cena as guest star, or will we hear about it in conversation?

You never knew you needed to see Shawn and Gus in colonial wigs – until now! 🇺🇸

Although there is no confirmation whether John Cena will or will not return to the latest Psych offering, Vulture shared that Carey Elwes will not be reprising his role as Pierre Desperaux. When asked if he would guest star on Psych: The Movie 2, the Stranger Things actor revealed that “I’m not, I’m afraid. I’m sad to disappoint, but I’m not.” He went on to explain, “I was busy shooting something else. It was a pity, but there you go.”

Who has been confirmed is Jimmi Simpson and Joel McHale. Simpson, who also stars on Westworld, will reprise his role as Mary Lightly. Mary was killed off on Psych, but that has not kept James Roday’s good friend from returning to guest star. Dulé Hill indicated that Jimmi is the highlight of the latest movie.

“There’s always the appearance of Mary Lightly. Even though he’s dead, he’s like a cat with nine lives. He just keeps showing up. Just Jimmi Simpson alone, just his appearance in the Psych movie, it’s well worth watching it. If you don’t watch anything else, just watch Jimmi Simpson.”

Fans could consider a Jimmi Simpson guest appearance as important as a pineapple.

Are you looking forward to Psych: The Movie 2? Are you bummed that Pierre Desperaux will not be back for the second season? Psych-O’s share your comments and predictions for the next movie. Be sure to check back with TV Shows Ace for the latest on the latest Psych movie. Fans should expect the movie to air sometime in December 2019.