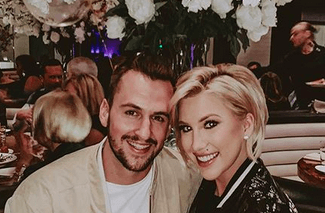 Chrisley Knows Best star Savannah Chrisley will be getting married soon. She is currently engaged to pro hockey player Nic Kerdiles. They announced their engagement in early April of this year, but they got engaged on Christmas Eve. Savannah described the engagement and said, “Nic’s family was in town and my whole family was there and we were filming and I was furious. I was like, ‘The fact we’re filming on Christmas Eve is absolutely insane. I have people here.” The couple actually kept the news quiet for a bit.

Well y’all…we did the dang thing!! 😍😭 Never in a million years did I think I would be this young and have found my forever person. You are the best decision I have ever made. You love me through all my flaws and imperfections. I’m so glad I didn’t settle for less because now I have everything I could want in a man and more. You know how to handle me. You know what I need when I feel like my world is in crumbling. You know how to make me smile on good days and bad days. You always listen to what I need to say. You support my decisions. You motivate me in whatever I’m doing. You love me unconditionally but more importantly, you respect me. How do you do it? I know it's not easy all the time (let’s be real…most of the time) but I appreciate you more than you could ever imagine!! I love you ALOTTLE 😂 I can’t wait to be your wife 🥰 photo creds: @nicolebalsamophoto

As it turns out, the cameras were there to capture the special moment. Savannah and her mom had to run an errand. When they got back, Nic had lit up the outdoor area. Everyone in their families was there to watch. Finally, he asked her to marry him.

Earlier this week, Savannah shared a picture on Instagram. She is wearing a cropped white button-down shirt and showing off her abs. In the caption, she says, “You all know by now that I’ve made a commitment to my health and definitely want to look and feel my best for the wedding. I just recently had an amazing photo shoot with my @southbeachdiet team and am very proud about how far I’ve already come.” Savannah looked amazing before she even started the diet.

You all know by now that I've made a commitment to my health and definitely want to look and feel my best for the wedding. I just recently had an amazing photo shoot with my @southbeachdiet team and am very proud about how far I've already come. South Beach has given me the confidence to feel good about myself, and within myself. Thank you @People and @usweekly for this story! If anyone out there is looking to get healthy and stay healthy, this is your program! Use my link www.southbeachdiet.com/savannahchrisley and you can save 40% on your first order! #southbeachdiet#southbeachdietambassador#southbeachfamily  #healthylifestyle #getfit #motivation  #goalsetting

Then, she adds, “South Beach has given me the confidence to feel good about myself, and within myself.” When asked about her diet, Savannah said, “it’s also just feeling good about myself and that was the biggest thing. I want to wake up in the morning and feel good.” She doesn’t want to make this weight loss about anyone else.

What are Savannah and Nic’s wedding plans?

The wedding is set for this summer. The couple has yet to share a date, but they may choose to keep their wedding date a secret.

At one point, Savannah mentioned wanting a private wedding with just family and close friends. This began to worry fans because they want to be able to see the wedding.

As of right now, it’s unclear whether fans will be able to watch the wedding or not. On the topic, Savannah said, “We’re trying to decide. Do we want to keep it really private, or do we want to tell all of our business? Because it is one day and you never get that day back. So, maybe we’ll just enjoy it for ourselves and then tell everyone after.”

What do you think of Savannah’s weight loss progress? Are you excited for her wedding? Let us know in the comments below!

Is Erika Jayne Interested In Dating After Tom Girardi Divorce?
Duggars Break Social Media Silence Since Josh’s Arrest – See It All Here
‘Unexpected’ Alum Diego Reyes Reunites With His Daughter
‘You, Me, And My Ex’: Is The Reality Series Scripted?
’90 Day Fiance’ Spoilers: Are Angela And Michael Still Married?