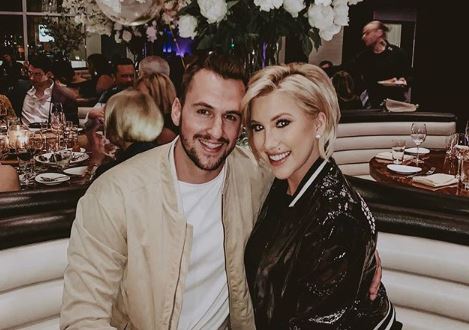 Growing Up Chrisley star Savannah Chrisley revealed great news today. People shared that she is now engaged to Nic Kerdiles. The couple is always posting pictures together and this isn’t shocking to fans. Savannah also shared the news on her Instagram.

The couple has been together over a year. He actually proposed to Savannah back on Christmas Eve. The couple decided to wait to share the news. This was probably because of their new show Growing Up Chrisley coming out. Obviously, they know this relationship is going to work.

It all went down at her home in Nashville. Savannah shared saying, “[On the night of the engagement], Nic’s family was in town and my whole family was there and we were filming and I was furious. I was like, ‘The fact we’re filming on Christmas Eve is absolutely insane. I have people here.’” Well, Nic probably wanted the cameras there, but she just didn’t know it.

Well y’all…we did the dang thing!! 😍😭 Never in a million years did I think I would be this young and have found my forever person. You are the best decision I have ever made. You love me through all my flaws and imperfections. I’m so glad I didn’t settle for less because now I have everything I could want in a man and more. You know how to handle me. You know what I need when I feel like my world is in crumbling. You know how to make me smile on good days and bad days. You always listen to what I need to say. You support my decisions. You motivate me in whatever I’m doing. You love me unconditionally but more importantly, you respect me. How do you do it? I know it's not easy all the time (let’s be real…most of the time) but I appreciate you more than you could ever imagine!! I love you ALOTTLE 😂 I can’t wait to be your wife 🥰 photo creds: @nicolebalsamophoto

Savannah Chrisley ran to the store with her mom for something she forgot. When they got back, everyone was outside and Nic had it all set up. He lit up the entire area before popping the question to her. Nic actually forgot everything he wanted to say, but it was still a perfect moment for the couple.

Savannah Chrisley shared that her mom actually helped pick out her engagement ring. Nic sent her a pic once to ask what she thought and she hated it. She did send him one of what she does like as a tip. Savannah shared the details.

“My mom actually kind of picked out the ring, and so she went and sat down with a jeweler in Nashville and picked out the diamond and all of that. And so, it’s kind of cool to know that she picked it out.”

Are you surprised to hear that Savannah Chrisley and Nic Kerdiles are engaged? Share your thoughts in the comments below. Don’t miss new episodes of Growing Up Chrisley on Tuesday nights on USA.