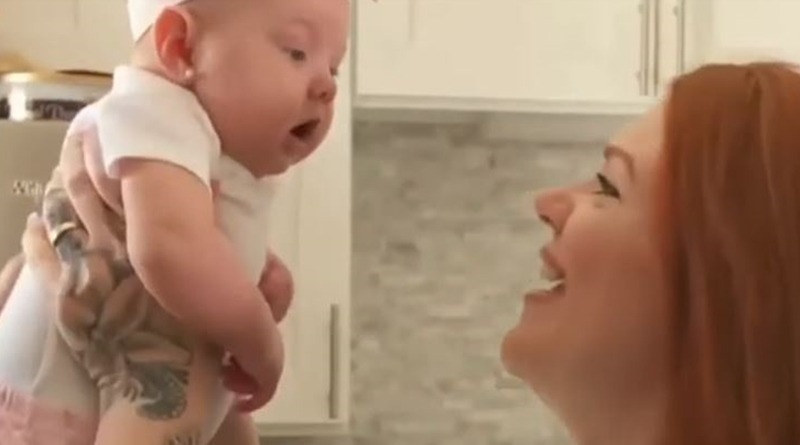 Love After Lockup fans know that Brittany Santiago and Marcelino will be featured on the new show, Life after Lockup. Actually, some fans suspect the show edited Season 2 of Love after Lockup to make Marcelino look like a bit of a control freak. However, the couple seems fine and doing very well these days. Their beautiful baby girl Zoila arrived in December, but now fans rushed to defend her baby daddy on Instagram.

Love after Lockup baby’s beautiful and the spitting image of her mom, Brittany Santiago

Brittany initially held back on the gender of her baby girl,  but these days, she’s happily posting photos of her on Instagram. Of course, fans of the couple love that she shares, so they are quick to jump on haters. Everyone knows that hating on kids is simply an Internet “no-no.” That’s why Love After Lockup fans rushed to defend the little one and her baby daddy, Marcelino.

Love After Lockup viewers clamored for information about their little bundle of joy, and she arrived and gets shown online, so why would anyone come along and start trouble? After all, many hope the Life After Lockup spinoff covers lots of happenings around the arrival of Zoila. Actually, Zoila’s a dead ringer mini-me of Brittany, who’s very beautiful and well cared for these days.

The photo that Brittany shared on her Instagram really is beautiful. It’s touching, and you can see Marcelino holding her up. Bright as a button and very cute, Zoila looks right at the camera. Really, this photo’s to treasure and enjoy. So many fans did just that, thanking them for sharing. Loads of comments came on the cutie-pie. However, one follower decided to call out the baby daddy. They said, “that can’t be his baby.” Like what? Other fans said that really was a rude comment.

A post shared by Brittany Santiago (@brittany.loveafterlockup) on Jun 1, 2019 at 5:03pm PDT

Actually, if you take the time to look at the picture, that little girl’s really got daddy’s smile. What do you think about fans rushing to defend Brittany Santiago’s baby daddy, Marcelino? Whether he is or is not the baby daddy shouldn’t make the slightest difference, and really it’s nobody’s business. He sure looks like he loves his beautiful daughter. Sound off your thought in the comment below.