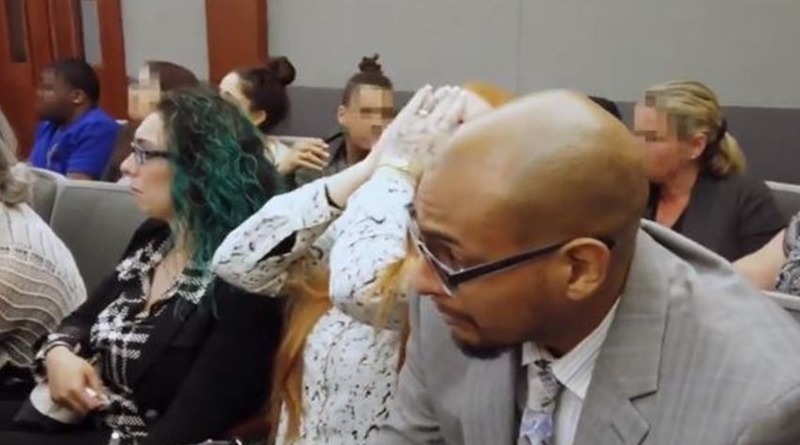 Life After Lockup is a spin-off of Love After Lockup and it’s coming on Friday, June 14 at 9/8 on WE tv. A preview trailer recently dropped for the show, and it seems that Sascha Williams’ trial could feature in it. Sascha, best friend of Brittany Santiago got sentenced in April and the cameras were there as the producers got media access.

The new preview that Wetv dropped a few days back does show a quick flash of a courtroom scene. Starcasm suggests that’s because the “show producers filed a request for media access and were approved.” Writer Asa Hawks noted, “I am guessing this is the courtroom scene featured in the dramatic trailer for the new Love After Lockup spin-off series Life After Lockup.” Of course, it’s unlikely that going forward we’ll see much of Sascha, but we probably see quite a bit of “bunkie” Brittany Santiago.

In real life, Sascha’s got a long time to serve. The news outlet noted that her sentencing came on April 3. She could serve anything from 10 to 36 years inside for felony charges. In fact, she did a plea deal which removed at least some of the charges against her. Her initial charges included things like “conspiracy to commit burglary” right through to “murder with a deadly weapon” which were dismissed. However, charges of “robbery with use of a deadly weapon” did stick. So too did, “conspiracy to commit robbery.” Her sentence took into account nearly 1,500 days that she already served.

On Love After Lockup, fans can recall that after posting bail, she met up with Brittany and Marcelino for “brunch.” When Marcelino asked why she’s been jailed, she answered with, “I was in a really bad relationship. So, bad decisions, Yeah.” However, it couldn’t stay a secret as The Las Vegas Review-Journal got ahold of the details.

They noted that the prosecutors “described the killings as a home invasion gone awry. On Jan. 8, 2013, Maurice Sims, his girlfriend at the time, Sasha Williams, and two other men broke into an apartment to get a TV she believed she was owed. They also took other electronics.” Additionally, the whole thing unraveled when Anthony Anderson fought back. Both he and Evin Russell died.

What do you think about the previews of the new Life After Lockup spin-off from Love After Lockup? Did Sascha Williams’ sentence shock you or did she get a lucky plea deal? On social media, many people saw the preview. They think it’s going to be a total blast with loads of drama in it. Sound off your thoughts in the comments below.

Remember to check in with TV Shows Ace often for more news about Life After Lockup.