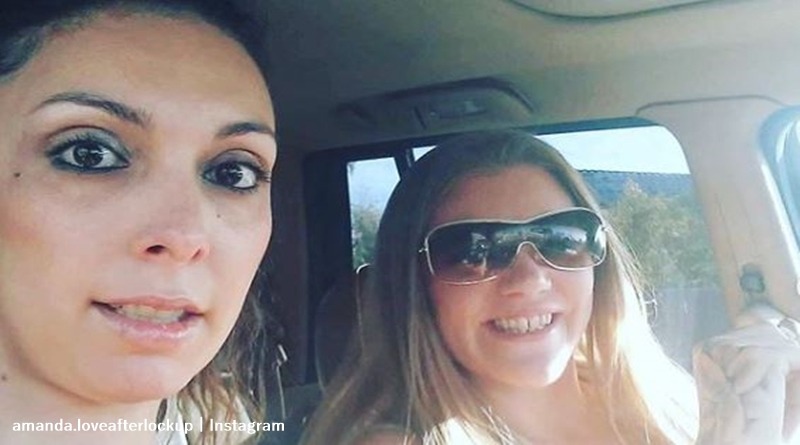 Love After Lockup Season 2 brought us scenes of Brittany and Marcelino Santiago hooking up and walking down the aisle. However, Amanda, who got out of prison ahead of her still had the hots for Brittany. That led to some complications, but it looks like they agree to be best friends rather than lovers these days. However, the last time Amanda Nicole posted on Instagram about Life After Lockup, the spinoff, was over a month back. Is she in jail?

In the recent preview of the Life After Lockup, we see that Brittany and Marcelino Santiago return. Thinking maybe Amanda maintained a friendship, if not a physical one with Brittany, we took a look at her Instagram. It seems that Brittany and Amanda still stay in touch, and we saw the Instagram post at the end of Season 2 of Love After Lockup. That came back in March.

In that post, Amanda expressed her ongoing love for Brittany. In part, it read, “I had a blast last night at the season finale Love After Lockup watch party! I met so many amazing people and I want to thank everyone for coming out and showing all the support, but I really want to give a BIG thanks to my girl Brittany Marcelino and her husband Marcelino because without u guys sharing ur true LOVE with the world none of this could of happened!!!!!! I love u guys and wish u nothing but the best 💍🥂”

I had a blast last night at the season finale Love After Lockup watch party! I met so many amazing people and I want to thank everyone for coming out and showing all the support, but I really want to give a BIG thanks to my girl Brittany Marcelino and her husband Marcelino because without u guys sharing ur true LOVE with the world none of this could of happened!!!!!! I love u guys and wish u nothing but the best 💍🥂@brittany.loveafterlockup #loveafterlockup #wetv #Healthyrelationships #teambrittanyandmarcelino

Amanda later posted up more about Brittany. In April, she showed a pic of them out and about together. She captioned that one with, “TBT” We’ve come a long way! Friends 4ever….. ” Plus she used the Love After Lock up hashtag along with Brittany’s. However, it seems that Brittany’s not all that vocal about her former lover. Over on her Instagram, her posts actually seem to deliberately not include any about Amanda. Since the reunion, not even one even tags Amanda.

Actually, Brittany dyed her hair, looks lovely, and posts loads of pics of her family. Recently, she even posted up a photo of their new baby girl. Her whole message is one of redemption, working hard to stay on the right track, and turning her life around. Even her post for the upcoming Life After Lockup talks in the hashtags of #healthyrelationships and #family goals. So, maybe this spinoff will showcase that side of things, rather than the relationship with Amanda.

And #baby makes four! We're so happy that we can finally share a few pics of our baby girl #zoila 🥰❤ it was hard keeping her a secret and always having to crop her out. Marcelino @blazebird45 and I have worked really hard to achieve what we have. We're not just "lucky" by any means. I hope by us continuing to share our story that we continue to inspire others. We love all of you who support us! #familygoals #teambrittanyandmarcelino #heathlyrelationships #foundsuccess #lifeafterlockup #loveafterlockup #wetv #love #happyfamily #felon2fame

Amanda Nicole’s posts about ‘Life After Lockup’ then nothing – is she in jail?

Also back in April, Amanda posted up the same promo for Life After Lockup as Brittany did. In her caption, she says, “And the journey continues for us!!!!!! Catch up with ur favorite couple.” So, as she used the word “us” presumably we see something her of anyway. However, that’s the very last time she posted anything to her Instagram.

Starcasm went off to find out if she’s actually back in jail. They did a lot of digging about her previous offenses. They note that in 2017, “Amanda was arrested for possession of meth with intent to distribute…According to court documents.” They added that “Amanda would later plead guilty to possession of methamphetamine (between 4 and 14 grams) with intent to sell, a Category D felony.” Plus they mention the grand larceny charges from earlier.

Now, fans who wonder about her sudden absence on IG since the end of April can probably relax. According to Starcasm, she appears “free and clear! The Nevada Department of Corrections lists her status as “inactive.”‘

What do you think about the posts on Instagram by Amanda Nicole about Brittany and the Life after Lockup spinoff? Do you think it’s clear that Brittany’s rather more focussed on her own family these days? Are you happy that it sounds like Amanda’s not in jail and maybe getting her life straight? Sound off your thoughts in the comments below.