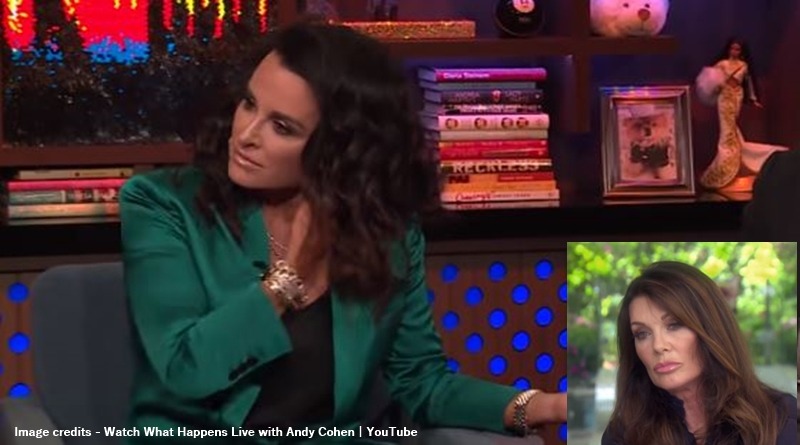 RHOBH fans who support Lisa Vanderpump became angry with Kyle Richards’ attitude after Lisa’s brother and only sibling died. Of course, they grew even more annoyed when Kyle decided the best time to confront Lisa over ‘Puppy Gate’ was on Lisa’s birthday weekend when she felt really low about his death, as well. However, Lisa moved on from it but noted it was not okay at the time.

Fans of RHOBH heard Kyle Richards open up about the pain she felt. To recap a bit, Kyle opted for her mammogram to be aired as she wanted to raise awareness. She also spoke about how hard it is as her mom died from breast cancer. Now, that’s not something to wish on anyone. However, if she suffered the loss of a close family member, one would assume she’d be empathetic to another cast member who lost a family member. However, Kyle came across with LVP as anything but sympathetic.

Bravo Tv’s Daily Dish reminded us about it. They wrote that Kyle said, “This test gives me so much anxiety, but the reason my mom died of breast cancer is because she didn’t go get a mammogram for five years…So if my mom had gone, maybe she would still be there, and I’m haunted by that thought all the time.” However, for Team Lisa fans, they were not so sympathetic. Rather, they grew angry that she understood loss, but seemed cold in the face of Lisa’s distress.

Fans of RHOBH often perceive Lisa as hard as nails, bossy, and totally strong. Therefore, seeing her break down in floods of tears came as a bit of a shock. Lisa’s a person too, just like the rest of us, and feels a lot of pain. However, sometimes she holds it together a bit better. So, the scene’s painful to watch.

What makes it worse somehow, is that when Lisa’s weeping, Kyle just comes over as remote and hard. She said, “I have things going on with me too.” Wow, that’s a bit cold, especially coming from someone who knows how grief can tear at people. The scene’s difficult to watch, and fans of Lisa on RHOBH took to Twitter to discuss it.

When the discussion rose on Twitter, and someone posted up a clip of Kyle being cold-hearted, fans expressed their anger and sorrow. However, Lisa interjected her thoughts on it all. As she pointed out, “It’s ok now, then it wasn’t.” Plus, Lisa notes that she’s “moved on.” Mind you, she said that’s “about the only clip [she’s] seen.” Lisa felt “It was such a devastating time in my life it was best not to watch.”

It’s ok now,then it wasn’t,but I’ve moved on and that is about the only clip I’ve seen.
It was such a devastating time in my life it was best not to watch.

What do you think about Kyle’s lack of empathy when she reacted to Lisa’s grief over her brother’s death? Are you surprised at how cold Kyle Richards seemed, especially as Lisa Vanderpump and Kyle were friends in the past? Could you move on from that if you were in Lisa’s situation? Sound off your thoughts in the comments below.

What Does ‘Temptation Island’ Star Kendal Do For A Living?
Jinger Vuolo FINALLY Tells Why She Isn’t Sharing Photos Of Her Kids
Todd Chrisley’s Son Chase Has EXCITING News!!!
MTV’s ‘Siesta Key’ Returns for a Sizzling New Season, Hot Preview
Peter Weber Starting A Podcast & Writing A Children’s Book, What?