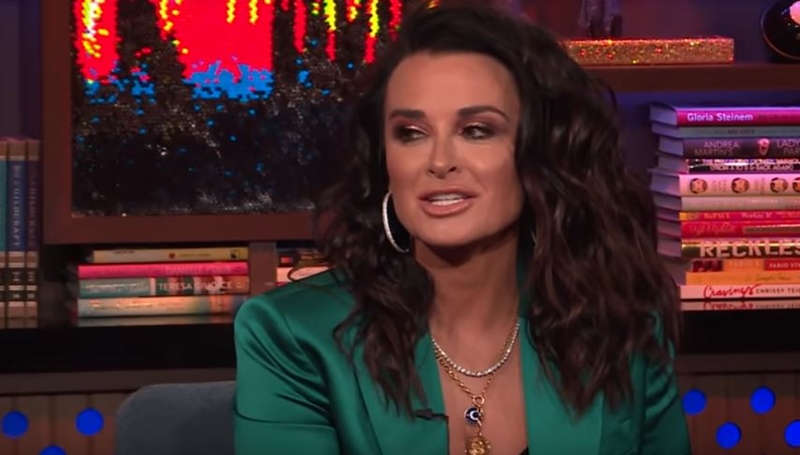 RHOBH fans recall this season’s full of drama between Lisa Vanderpump and the other cast members over ‘PuppyGate.’ We saw Kyle Richards confront Lisa in her home, and Ken Todd coming to Lisa’s defense. Ken booted Kyle out the house and social media took sides.  Now, Kyle says she still “cares” for Lisa and Ken after videos, memes, and tweets about #GoodbyeKyle surfaced as she was seen walking past SUR since the confrontation.

Kyle already talked about the big bust-up between her, Lisa, and Ken. TV Shows Ace reported on Kyle first addressing the issues on her Bravo Blog. “During the lunch with the other ladies, Kyle Richards admitted that Vanderpump could very well have planted the story. Defending her decision not to deny Lisa V.’s possible involvement, Kyle wrote …’I grappled with taking the easy way out OR telling the truth. I am not a liar.'”

Now, since many memes and tweets hit on video footage of Kyle walking past SUR after the incident, Kyle readdressed it again on Instagram Stories. On Sunday night (April 7), she posted up a long blurb about it. Once again, she revisited her motivation for confronting Lisa in the first place. In it she says, she never expected “to be having a conversation with both Lisa and Ken.” She expected a private talk with Lisa. She notes, as we already know, that Ken told her to leave saying “Goodbye Kyle.”

The #GoodbyeKyle ‘joke’ comes back to bite Kyle on Twitter

Walking past SUR after the RHOBH confrontation, Kyle says in her Story that she “joked” about “Goodbye Kyle” on her way to The Abbey. She says she’d rather laugh about life than “take it lying down.” However, following backlash from Team LVP and others, she notes that many comments suggest she just wants “Lisa off the show.” Kyle flatly denies that in her Insta Story, saying, “Lisa and I have had arguments in the past and never at any point did I want to do the show without Lisa.”

Kyle points out the argument happened seven months back. Plus, she thought RHOBH fans would appreciate her joking instead of banging on about a “man getting up in [her] face.”  Finally, Kyle says of the whole thing, “I have not taken that route intentionally, as regardless of what happened between Lisa, Ken, and me, I do care about them. 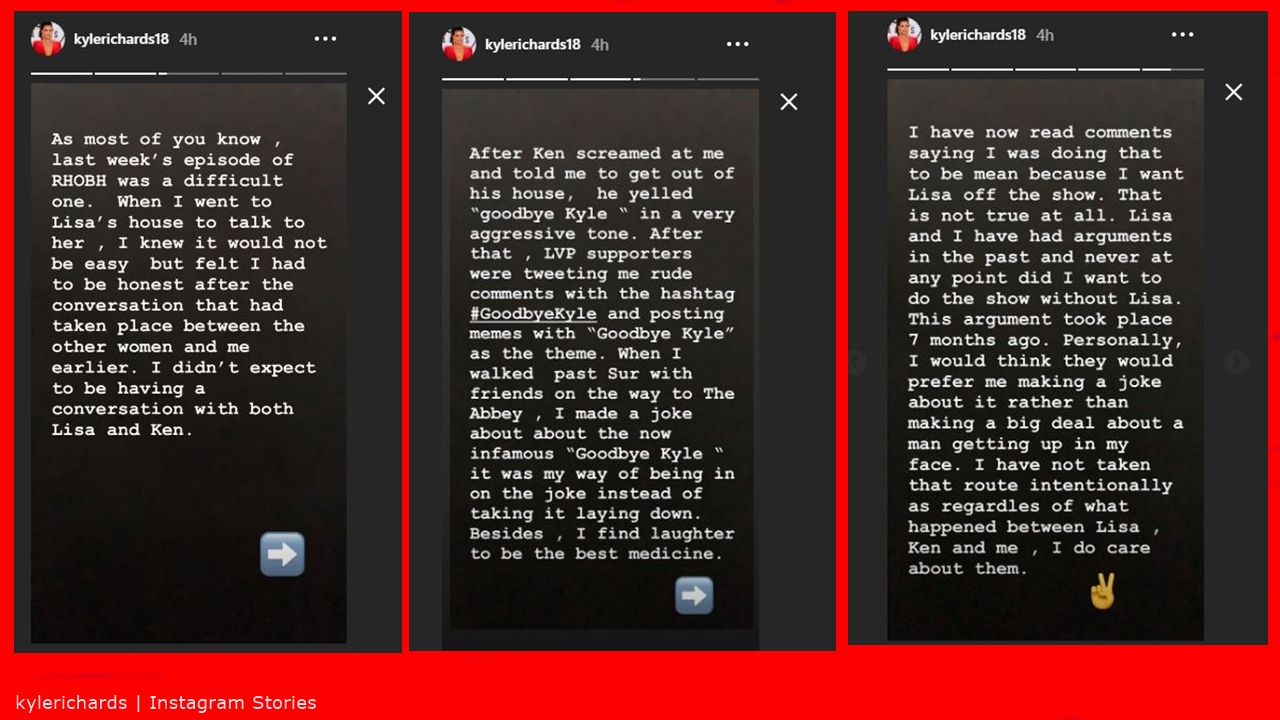 Kyle Richards may be hardpressed to convince RHOBH‘s Team LVP supporters. Over on Twitter they still talk about it as a “joke” in poor taste. Here’s what just one of them, @Mit** said: “Kinda proves that #GoodbyeKyle really hit a nerve. Kyle will never live it down. She is shook. “Make it a joke” her publicist said, “turn it around on them”. Bad choice. This just reinforces exactly why Ken Todd said “Goodbye Kyle” in the 1st place. Kyle is NOT a smart woman.”

What do you think about Kyle Richards saying she still “cares” for Lisa Vanderpump and Ken Todd after the confrontation? Do you think the #GoodbyeKyle joke backfired on her? Have your say in the comments below.